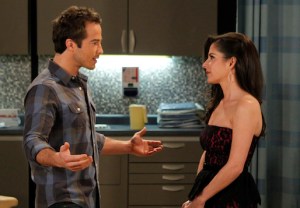 For its next, 52nd anniversary*-related trick, ABC’s General Hospital will present not one but two episodes live.

The special broadcasts will air Friday, May 15, and Monday, May 18, just as the May sweeps rating period is drawing to a close. They continue an anniversary celebration that thus far featured current cast recreating original scenes/characters from the sudser’s April 1, 1963 debut, and just this Wednesday revealed a darrrrrk secret from front man Luke Spencer’s past (watch video here).

“Taking such an iconic show as General Hospital live for two days is both exhilarating and risky,” executive producer/head writer Frank Valentini said in a statement cited by People.com, the first to report the news. “I am enormously proud of our cast, crew and staff for all their tireless dedication and hard work that will be leading up to this daytime television event. It’s live television and absolutely anything can happen, but that is what’s fun about this and we’re absolutely up to the challenge.”

As TVLine reader “C” reminds, ABC’s One Life to Live staged an entire week of live episodes back in May 2002, in between Valentini’s turns there as a producer.

Who do you think is most up to the challenge of working without a net? And, more entertainingly, the least?

* Maybe I missed a memo, but why all the pomp and circumstance surrounding No. 52?