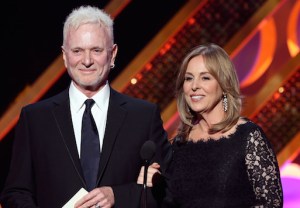 Laura Spencer is heading back to Port Charles.

Genie Francis, best known for playing half of General Hospital‘s Luke-and-Laura supercouple, will return to the ABC soap.

PHOTOS May Sweeps/Finale Preview! 100+ Spoilers and Exclusive Pics From Your Favorite Shows

Hey #GH fans: I have AWESOME news…@GenieFrancis is coming back to @GeneralHospital !!!

UPDATE: A rep for the show tells TVLine Francis will return “in a few weeks.” The show is not yet releasing any information what brings Laura back into the action.

“Genie is a part of our GH family and the door has always been open for her to return when the timing and story are right,” Valentini said in a statement. “Lucky for us, the stars have aligned and we are thrilled to welcome Genie back home.”

Francis last appeared on the daytime drama in 2013, when her fan-favorite character married — and later divorced — Scott Baldwin, then returned to her home in France.

Francis began playing Laura in 1976, was part of one of TV’s biggest spectacles when Laura married Luke in 1981, left GH in 1984, and has made several returns of varying lengths since then. She won a Daytime Emmy for the role in 2007.