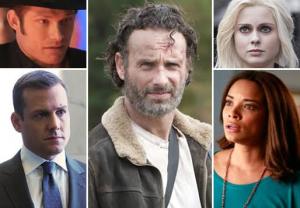 Question: Teen Wolf? Any information? —Sandi
Ausiello: A vague question gets a vague answer, Sandi. While I’m sure you’re still reeling from Aiden’s return in the first six minutes of the June 29 premiere — click here to watch that if you haven’t already done so — you’ll be happy to know he’s not the only member of the show’s fallen faction that receives a tribute of sorts in Season 5’s opening hour.

Question: Anything on Season 6 of The Walking Dead? —Gerry
Ausiello: Yup. I think I may already be able to reveal the first casualty of the season: new guy Kirk’s innocence. Casting intel describes the mid-twentysomething married man — as yet uncast — as a Mr. Nice Guy who, over and over, gets the same message from cruel fate: Do unto others before they can do unto you. And since whoever’s hired for the recurring role has to be available for future seasons — but there’s no such requirement placed on the actresses vying for the part of his wife, Hilda — it seems safe to speculate that losing the missus will eventually push him over the edge. Or am I reaching here?

Question: Anything on how Falling Skies‘ 2nd Mass is doing now Tom that is floating around in space? —JJ
Ausiello: The good news: With the Espheni power core destroyed (thanks, Lexi!), the Skitters and Mechs are (mostly) sitting ducks. The bad news: The assorted ETs have still got some pluck (and maybe a tiny new weapon), and at the start of the final season’s Episode 2 they strike a critical blow against the 2nd Mass, one that will leave them wondering: “Is Skitter meat edible?” (Also: Don’t be so sure that Tom is floating around in space…)

Question: Please tell me good things about Kyle Dean Massey’s future on Nashville. I saw him in Pippin on Broadway and am obsessed. —Anders
Ausiello: Officially, the ABC drama has no plans to make Massey, who plays Will’s songwriter love interest Kevin, a series regular. Unofficially, this shirt was recently added to the show’s official store, which seems like a good omen to me.

Question: Got anything on Power‘s Tasha and Angela? I feel like they’re gonna throw down pretty soon. —Toni
Ausiello: A showdown between Ghost’s wife and his lover is in the cards, star Naturi Naughton says, “but I don’t think it’s going to be the way you expect… It’s not going to be the typical way of [Tasha] taking off her earrings and pulling [Angie’s] hair — of course, that’s what I want to do, as the character. But I think Tasha always chooses to be a classy woman.” Leela Loren, who plays Angela, agrees. “These are two incredibly intelligent women,” she says, adding that a stereotypical catfight “would be beneath either one of them.”

Question: Aloha, Michael. Sooo… what is happening on Suits? A hui hou. —Kamea
Ausiello: Stop the lies, Kamea. We all know you live in Bayonne. Regarding Suits, Harvey is reeling so severely from the loss of Donna in the June 24 season premiere that he seeks out a therapist (The Assets‘ Christina Cole). Elsewhere, Louis almost ruins his new partnership with Donna, the can opener makes an appearance, and Mike and Rachel decide not to loop in everyone about their engagement.

Question: Do you have any spoilers for Girl Meets World in any of the future episodes? —Sefket
Ausiello: Do I ever, Sefket. Friday’s episode features the long-awaited return of Angela, Shawn’s high school girlfriend, though their reunion probably isn’t what most fans are hoping for. She seeks him out for a very specific purpose — and it isn’t to ask him on a date.

Question: Can I get an explanation for the Wayward Pines scene with Pope on the road with Ethan’s wife? If he’s in 4028 and she’s in 2014, how did that happen? —Indiana
Ausiello: Matt Mitovich can explain it best: “In that scene, Pope’s not in 4028. Yet. Everyone you’ve met existed in our time/’the past.’ But then at some point, as detailed in the next episode (airing June 25), each Wayward Pines-bound person was put into ‘hibernation’ and eventually awoken in the (distant!) future.”

Question: Embarrassed at my age to be asking about this, but will Taylor and Max get back together on Finding Carter? —Jennifer
Ausiello: I won’t ask how old you are, Jennifer, but I will give you what you came for. You’ll know more about Max and Taylor’s future — among other surprises — after Tuesday’s summer finale, but for now, I’ll just say this: The whole Max-slept-with-Carter thing won’t prove as much of a roadblock for Max’s reunion with Taylor as one might expect. In fact, it’s barely a speed bump. Croutons for everyone!

Question: I will take anything Major Crimes-related! —Analiese
Ausiello: There promises to be fireworks when in the TNT drama’s Fourth of July-themed episode (airing June 29), Buzz goes on a ride-along with Provenza and Flynn. “They are not very interested in the new way of doing things that Buzz has learned” as a reserve officer, series creator James Duff previews. And working a holiday weekend, they’re hot to close the case at hand. “So, they’re looking at a dead guy in a bathtub and going over what they think what might be a suicide note, while Buzz is over at the bathroom counter looking at the hairdryer dripping, which they’re just ignoring,” Duff says. “It’s really kind of funny.”

Question: I was on the fence initially, but I ended up loving iZombie. Any scoop? —Amy
Ausiello: Odds are good we’ll meet Liv and Evan’s pa in Season 2 (and, yes, despite the age difference they do have the same father). “We have been talking about Season 2 as being the Season of Dads,” series creator Rob Thomas tells TVLine. “We might meet several people’s dads in Season 2, including [Liv and Evan’s]. We kept him intentionally unmentioned because we hadn’t worked out how we wanted to bring him in or what we wanted to do with him… We have a desire to do it, and I think we have a neat backstory on their dad.”

Question: Any scoop on April and Mark scenes on Mistresses? —Semaj
Ausiello: Rochelle Aytes’ gorgeous alter-ego may have ended her romance with Ricky Whittle’s ab-tastic FBI guy Daniel, but don’t assume that sparks will immediately fly between the newly single lady and newcomer Mark (The Client List‘s Rob Mayes). For one thing, April meets him via Miranda (aka her late hubby’s erstwhile lover who crawled out of the Florida swamps). “We’re shaking up April’s home life in an extreme way. Mark will become a hugely important person — someone April fights with, someone she laughs with, someone she leans on. But it’s very much a familial experience,” teases showrunner Rina Mimoun. “A lot of the fun of the April-Mark dynamic is watching them live in their Odd Couple-ness and enjoying the Modern Family of it all.”

Question: Please tell me everything you know about Anthony Geary’s last General Hospital episodes. I still can’t believe he’s actually leaving. —Linda
Ausiello: The WSB would put out a hit on me if I told you everything, so how about I just tell you this: You might need tissues for the moment when Luke and Lucky Spencer are reunited; Genie Francis (Laura) says watching Geary act opposite Jonathan Jackson again nearly did her in. “There’s some amazing scenes between Tony and Jonathan,” she tells TVLine. “I stood at the monitor and couldn’t move, couldn’t leave.” Even sadder (for us): Francis adds that she and Jackson didn’t have any one-on-one scenes during his return to the ABC soap.

Question: The Fannibals are hungrier and hungrier. Throw us a Hannibal bone? –Ro
Ausiello: I see what you did there, Ro, and since you’ve clearly got some skin in this game, here’s a little morsel for you. You know how Bedelia Du Maurier has seemed rather isolated from everyone except Mads Mikkelsen’s titular cannibal during her European tour? Well, as Hugh Dancy spilled to my colleague Michael Slezak during a recent public Q&A at the Apple Store in Soho, his profiler Will Graham will be crossing paths with Gillian Anderson’s enigmatic therapist — not just in Italy, but also after the show’s midseason time jump that will usher in a dramatic transformation of Will’s personal life.