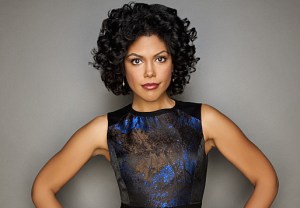 For the last two years, The Bold and the Beautiful‘s Karla Mosley has played homeless-woman-turned-aspiring-fashion-mogul Maya Avant. Maya is plucky, beautiful and driven, but she’s hardly a newsmaker.

Then, Wednesday’s episode revealed that Maya used to be a man named Myron. All of a sudden, the CBS soap’s willingness to explore a transgender character — which other daytime dramas have tried (and failed at) in the past — has more than just B&B diehards waiting for today’s episode.

What will the new development mean for Maya and Rick’s relationship? What about that baby Dayzee helped her have adopted? And how will the show’s international fans respond? TVLine chatted with Mosley about what Maya/Myron means for Forrester Creations and beyond.

RELATED TVLine Items: Bo and Patch to Return to Days of Our Lives

TVLINE | Headwriter/executive producer Bradley Bell first told you all of this around Christmas?
It feels like being called up to the principal’s office. [Laughs] He said, ‘Maya’s got this secret.’ He told me what it is. And then I had to keep it from the rest of the cast and crew for a month. Reign [Edwards], who plays [Maya’s younger sister] Nicole, didn’t know until the day before when we got our scripts. Even then, on the day we were shooting it, some of the cameramen didn’t know. It hadn’t gotten around. It’s been quite kept under wraps. It’s been a really interesting journey.

TVLINE | A while back, All My Children introduced a male character named Zarf who soon revealed he was transitioning to a female named Zoe, and the fans never really showed up for that storyline. Using Twitter as a gauge, your storyline already seems to have significant fan interest, if not yet support. What do you think accounts for the difference?
I think it’s the times. That was, what, 10 years ago that that happened? It’s amazing how, even in the past five years, our country has shifted. We can certainly see that politically. Also, I think, it’s social media that’s helping. Today I felt some unrest, some people asking questions [online]. I was able to go online for an hour and just tweet with people. It’s something we can all process together. The reason that we watch soaps is to talk about them, and social media is such a great platform for that. All of those things combined, the shifting climate and that people really do like Maya — or love to hate her. They’re committed to sticking with her, on one level or another, and I’m certainly grateful for that.

TVLINE | She and Rick are together, and he is not the most tolerant person — of anything.
[Laughs] Not at all.

TVLINE | Can you speak to how this will affect their relationship?
This information about Maya really connects dots for me. The reasons that she has spontaneously let Caroline win in the past or decided so quickly to marry Carter and then decided so quickly to completely screw up that relationship, I think it all has to do with her fear that Rick is going to reject her when he finds out the truth. And her fear of having to disclose — because I don’t think that she’s ever been in a relationship like this… I think in all of her past relationships, people have known already. Or it was something that wasn’t gonna last. So she suddenly found herself in this relationship that could possibly last with a man with whom she’s been very honest. Other than this, Maya is honest to a fault. She’s just terrified, on some level.

TVLINE | You mentioned on Twitter that the show isn’t rewriting history when it comes to Dayzee having helped Maya have a child adopted. What can you tease about what we’ll learn about that?
It’s an adoption story — we never saw Maya’s baby. We never saw that she had the child. That’s what I can say about that. Maya’s history has been very fuzzy. We’ve all been wondering: What was the deal with Jesse? How did she end up in prison? Again, for me, this really clarifies what that backstory is, why her relationship with Jesse was so tumultuous and some of what might have been going on at that time.

TVLINE | When we pick up in the next episode, is it a continuation of the scene?
It’s a direct pick-up. We really get to hear more about what’s going on between Nicole and Maya.

TVLINE | The Bold and the Beautiful has a huge international following. How do you think this storyline will play around the world?
It will remain to be seen. One of the great things about it airing in the United States first is that we get to process it together — and in Canada — and then Australia. So hopefully we’ll lead the world in opening hearts. I hope that all countries will air it and at least explore it. What’s great about soaps is there’s this element that people allow a little bit of leniency in a way they might not in other genres. [The series is] hiring trans actors to support the storyline, so it’ll also give maybe a little more visibility within the trans community around the world.