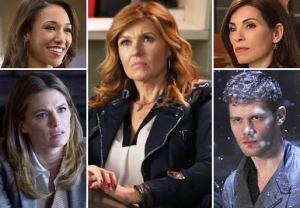 Question: Can we get another clue for the Blind Item about the couple splitting up? —Meredith
Ausiello: The reason for the split (storyline-wise) will likely incur as much fan wrath as the break-up itself.

Question: Oh, Sultan of Scoop, summer TV has failed to wow me so my mind has been drifting to the puzzle of your blind items. One question keeps hovering, like an annoying picnic fly: Is there any relationship between your two Blind Items, Bonkers Leading Lady and Fall’s Most Divisive Television Event? Did one possibly cause the other? —TaMara
Ausiello: I like how your mind works, TaMara. But, no, those two B.I.’s are unrelated.

Question: I’m dying for news about Nashville‘s new season (unless it’s about Deacon dying. In that case, I don’t wanna know). –Christina
Ausiello: How about some new faces making their way to Music City? The show is casting Markus Kane, a globally successful, late-20s to 40something artist who’s looking for a new label to represent him as a solo act. Though every label courts him, Rayna’s Highway 65 is the one that’ll eventually win him over with talk of stripping away all the noise and getting to the essence of his soulful musical truth. Things are great… until Markus realizes how much Rayna’s fledgling company needs his solo album to be a hit. That’s when his controlling, narcissistic side comes out, and he’ll test his boss’ boundaries throughout the writing, recording and release of his first solo album. BONUS SPOILER: #LoveWINS — but Will may not when Luke hires a no-BS elite media consultant named Gabriella to handle the fallout from Mr. Lexington’s very public coming-out. Though Gabriella herself (and an increasingly accepting Luke) are cool with Will’s sexuality, she serves as a giant reality check: Country-music fans may not support Will now that they know he’s gay.

Question: Got any other Flash scoop for next season? —Jeannette
Ausiello: My gut is telling me Joe is going to partake in some nookie-nookie with a woman named Olivia. In potentially related news, producers are looking for an African-American actress in her early-40s to play a troubled old friend of Joe’s. The recurring character’s name is Olivia.

Question: I’m a big fan of Iris West on The Flash. Any info on what’s to come for her in Season 2? –Leslie
Ausiello: Hopefully, more of an independent and resourceful Iris, per Candice Patton’s wishes. “She’s found her way into S.T.A.R. Labs and she’s trying to get her career off the ground at Picture News,” her portrayer says. “So I, personally, am really hoping to see Iris have more agency and more abilities to help the team and The Flash and the city that she loves so much. I want to see her stand on her own two feet and really contribute to the group.” BONUS SCOOP: Patton teases that, following the wormhole cliffhanger, the Season 2 premiere will address “where Barry is and what that means for S.T.A.R. Labs and Iris and Joe and Eddie. It’ll pick up right where we left off.”

Question: Any new faces coming to The Originals in Season 3? –Ashley
Ausiello: How ’bout three new faces, Ash? I’m told the CW drama’s third season will introduce Aurora, a sexy vampire capable of turning on a dime and unleashing her dark side; Lucien, another good-looking, calculating vamp who comes to town with a personal vendetta against the Mikaelsons; and Detective Will Kinney, a handsome lawman determined to bring wrongdoers to justice — even if he has no idea said scalawags could be sporting fangs.

Question: Any spoilers about Joss and Harry’s future on Mistresses? —Abby
Ausiello: Don’t expect problems in the bedroom for the former in-laws — as this Thursday’s episode finds Joss describing the couple’s first horizontal mambo as “the most connected, passionate sex I ever had.” In the bar room, however, it could be a different story. Look for Emmanuelle Vaugier’s sexy mixologist Niko to pull the kind of sabotage that’ll have you revisiting the show’s unofficial Season 2 catchphrase, “Can’t have that!”

Question: Any further word on Castle‘s Season 8 premiere? —Ben
Ausiello: I can confirm that it will be a two-parter, the first of which will be titled “XY” and penned by co-showrunners Terence Paul Winter and Alexi Hawley.

Question: Please tell me when Season 2 of Satisfaction is starting up! Ever since The Glades was cancelled, I need my Matt Passmore fix! —Kari
Ausiello: Alas, USA Network is still mum on a premiere timetable — which isn’t to say there isn’t scoop. In fact, TVLine has learned that Days of Our Lives alum Nadia Bjorlin will guest-star in Episode 7 of the new season, in an undisclosed role.

Question: Michael, can you give me some UnREAL scoop, please? —Chris
Ausiello: Quinn’s manipulation of Rachel “becomes obvious” in the final batch of Season 1 episodes, previews leading lady Constance Zimmer, who adds, “Because of the circumstances, they’re forced to face facts and face situations head-on. There is no running around it anymore. Quinn and Rachel do some pretty horrible things to each other toward the end of the season, which leads into another season very well.”

Question: I’m addicted to Wayward Pines. Got any spoilers on this week’s episode? —Colleen
Ausiello: Here’s an exclusive sneak peek at Ethan struggling to give ex-lover Kate the time of day. Er, year.

Question: Longtime fan, first time writing in. Do you have any inkling about ABC’s decision regarding a Rookie Blue Season 7 renewal? Thank you and you are awesome! —Erin
Ausiello: I can exclusively confirm that, yes, I am indeed awesome. I’m less certain about Rookie Blue‘s future (the series first needs to be picked up by its Canadian broadcaster Global). “We haven’t heard anything about a renewal,” executive producer Tassie Cameron tells TVLine. “If it does return, it will be in [producer/writer] Sherry White’s capable and talented and charming hands… I think the writers are writing scripts and working, but it’s hard to really get momentum until we’ve heard. With any luck, it will do well [on ABC] and somebody will give Sherry a call.”

This AAnd That…
♦ Casting for CSI‘s two-hour series finale is still being finalized, but one alum who I’m hearing will not be participating in the swan song is (no surprise here) Gary Dourdan.
♦ The first hour of Fox’s Scream Queens belongs to co-star Billie Lourd, according to TVLine’s Vlada Gelman, who recently attended an intimate screening of the premiere hosted by series co-creator Ryan Murphy. A deadringer for mother Carrie Fisher, Lourd makes a strong first impression as Emma Roberts’ minion, Chanel No. 3, per VG.
♦ The Good Wife‘s Season 7 premiere, titled “Grunts,” will mark the introduction of Dirk, a charming new associate at Lockhart Agos Lee who “intends to make his presence felt” at the firm.