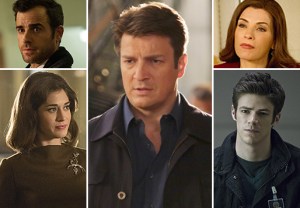 Question: Any scoop about Castle? —Fred
Ausiello: The finale — which is supposed to delve into both Castle and Beckett mythology — will feature a “distinguished, highly intelligent” psychiatrist. What say you, Mitovich? “Perhaps the shrink is a means to pull out of Rick any repressed memories about his ‘missing’ months?'” Yep, that sounds about right.

Question: Got any scoop on Season 2 of The Leftovers? —David
Ausiello: As the drama moves into uncharted territory — it’s already used up most of the plot from the novel on which it’s based — it’s also moving, period, from fictional Mapleton, New York to suburban Texas. In addition, to replace the supporting characters that it’s dropping, the show is adding an African-American family made up of the righteous John Murphy; his hearing-impaired doctor wife, Erika; and their teenage kids, Evie, an athletic extrovert, and Michael, a devout Christian. 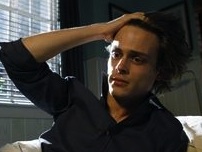 Question: Any info on Criminal Minds’ Reid? —Emilie
Ausiello: If you were hoping that Reid might finally be ready to move on from Maeve’s Season 8 death — with either forensic scientist Dylan Einstein (played in a February episode by Candace Hammer) or Agent Dorian Loker (recent guest star Emily Churchill) — showrunner Erica Messer notes that the remainder of Season 10 was already plotted out at the time those potential pairings aired. As such, “It’s something that we can explore next season,” she allows.

Question: Things got pretty heated between Norma and Romero on the last episode of Bates Motel. And not in a good way. Any hope that the couple of next episodes bring something better for Sheriff Sniff-Around and his Probably-Favorite-Murderer? —Sara
Ausiello: The wannabe lovers end up working together in next Monday’s episode when Norma finally retrieves the info from that flip drive (well, someone else retrieves it for her) and decides she wants to play hard ball with Ted from Mad Men. It leads to a couple really fun scenes between Vera Farmiga and Nestor Carbonell. (For more on Norma and Romero, see “This AAnd That” below).

Question: So… was that corny ending the last for Hart of Dixie? —Karen
Ausiello: Yes, ma’am. (Allegedly)

Question: Unless I missed it, I do not think Bones addressed the passing of Ralph Waite (who played Booth’s grandpa). Do you know if they ever intend to do so? —Adrienne
Ausiello: You did not miss it. “We struggled with that this season and, the truth is, the timing always seemed wrong because we were off the air,” exec producer Stephen Nathan laments. “We were so far ahead in episodes that to do that seemed more exploitative than respectful, and we just didn’t want to use Ralph’s death in that way. We loved him and he was a tremendous part of the show, but we didn’t want to use him.”

Question: Got any scoop for us on The Fosters? — Ashley
Ausiello: Well, Ashley, how about details on a new, accidental troublemaker coming in Season 3? His name is Tony and he’s a talented musician described as “good-looking in an ‘adorkable’ way,” and he tends to put way too much pressure on himself. We don’t know much else about him right now, but I’m thinking he could end up as a pal for Brandon or a love interest for Callie… or both.

Question: Any scoop on the upcoming season of Masters of Sex? We already know Allison Janney and Beau Bridges will return, and obviously the two protagonists are going to be there but, what about the rest of the characters? —Argi
Ausiello: Teddy Sears is out at Austin (although a guest appearance or two is a possibility), and Virginia’s kids, Tessa and Henry, are being recast as teenagers — to accommodate a six-year time jump and also to allow the show to explore the pair’s burgeoning sexuality — particularly that of Tessa (who will be quite the little minx).

Question: I’m always looking for The Vampire Diaries spoilers! —Molly
Ausiello: Well, Molly, with the cure for vampirism back in play, someone’s going to have to man up (so to speak) and take it — except everybody’s got a different idea about who that person should be. Joseph Morgan, for example, thinks it should go to Damon. (“It would be interesting to see a human Damon. Let’s see if he can still be sassy when he’s not immortal.”) But if there’s even the slightest chance that the cure could be mailed to The Originals, Morgan would like to see Rebekah take it, after being returned to her original body. (“That’s what she’s always wanted.”)

Question: I know it’s been a couple of weeks, but I still can’t believe Cookie and Jamal didn’t end up on the same side at the end of Empire‘s Season 1 finale. Any intel on what’s in store for them in Season 2? —Doris
Ausiello: “Child, I don’t want no chicken.” (Sorry, that classic Cookie quote is not relevant to your query, but a little laughter never hurts, right?) That’s not the only reason to smile, though, Doris. Turns out there are plenty of Cookie-Jamal fans in the Empire writers’ room, too. “It was very tough for us — heartbreaking, even. And that was our intention,” showrunner Ilene Chaiken says of the mother-son rift. “But I still believe in that relationship… and I would like to think that the underpinnings of that relationship, which is the most profound and tender one in the show, will somehow lead to something of a rapprochement between them.”

Question: Do you have any quality info about The Flash that you can share? —Brandy
Ausiello: Barry and Joe’s decision to clue Eddie in on The Flash’s identity while keeping Iris in the dark is going to cause plenty of disagreement within the trio. “Eddie, as the much more emotionally in-touch character, is like, ‘This is ridiculous. By not telling her, you’re actually putting her in more danger,'” exec producer Andrew Kreisberg previews. “That starts to become the conflict between the three men, because Eddie is not happy with how Barry and Joe have been handling this. It starts to really impact his relationship with Iris.” It’ll also force Barry to take a good, long look at himself — and he won’t like what he sees. Teases Kreisberg: “Barry will go, ‘Wait, when did I become such a great liar? I thought of myself as so innocent and pure.'”

Question: Flash spoilers? —Andy
Ausiello: Did you see these date night photos from the April 14 episode, featuring the arrival of two Arrow residents in Central City? Allow Kreisberg to explain: “Eddie, Iris, Barry, Felicity and Ray all go out for dinner. Everybody is talking about their feelings, and Eddie and Iris get into a fight. Barry’s the fifth wheel.” Adds Rick Cosnett (Eddie): “Brandon Routh and I had a lot of fun with that scene. We all don’t know what to say, because there’s so much going on with Wells and with everyone’s storylines, that the dinner is 10 times more awkward than our little double date that we had at Jitters [with Barry/Felicity].”

Question: I’d love a Jane the Virgin scooplet. —Tim
Ausiello: You have not seen the last of Bridget Regan’s Rose (AKA Sin Rostro), who executive producer Jennie Urman says is part of “a big twist” at the end of the season.

Question: Will we get to see Dahlia in the present day on The Originals this season, and if so, what episode? — Tom
Ausiello: Dahlia will indeed show her face in present-day New Orleans — and sooner than you might think. Klaus’ evil aunt arrives in Episode 18, but not before we discover even more twisted secrets about her. “We’re going to go back and learn more about Dahlia and Esther’s history over the next few episodes,” star Joseph Morgan says, adding that the new information “will really humanize both of them.”

Question: First and foremost, I love Matthew Goode on The Good Wife. But I also rather enjoyed him in Downton Abbey‘s Christmas special. Could you shed light on the potential of him being on one or both shows? —Jessica
Ausiello: He will almost certainly be in the final season of Abbey. His future on The Good Wife beyond Season 6 is less certain, although exec producer Michelle King recently hinted to us that Goode might end up juggling the two. “There’s always a dance with scheduling,” she said, “so [we can always] dance around Downton Abbey.”

Question: Has it been confirmed that The Good Wife is ending at the conclusion of Season 7? —Jason
Ausiello: The Kings always viewed Wife as a seven-season saga, but the ultimate decision isn’t up to them, as Robert King reminds us. “It’s a big question mark, because it’s a question that’s beyond us,” he says. “It’s… CBS.” He notes that viewers can probably sense that “we’re counting down” via the episode titles, but adds, “That doesn’t mean an end is an end.”

Question: Any more news on if there’s going to be a death on Grimm? —Lianne
Ausiello: Yes, the Grim Reaper will make an appearance in the finale.

This AAnd That…
♦ Can you picture anyone other than Tovah Feldshuh playing Alexandria “mayor” Deanna Monroe on The Walking Dead? Neither can I. But fun fact: Producers flirted with the idea casting a certain Scandal villainess in the role.
♦ Remind me to tell you about the bonkers leading lady that is driving the cast and crew of her popular-yet-modestly-rated series mad — so much so that pretty much everyone is dreading going back to work next season. (Sounds like it’s time for my first set visit!) 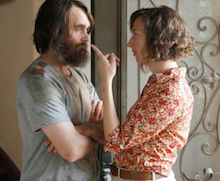 ♦ My five favorite TV couples of the past 12 months (in no particular order): Norma and Romero/Bates Motel, Kevin and Nora/The Leftovers, Phil and Carol/The Last Man on Earth, Libby and Robert/Masters of Sex, and Cookie and Porsha/Empire.
♦ I’m getting worried about the Twin Peaks revival, gang. I hear the rumors about David Lynch and Showtime not seeing eye-to-eye on a few contract points are true, which begs the question: Shouldn’t Lynch’s deal have been finalized before the project was announced and Kyle MaClachlan signed on and all nine scripts were written? Show Business, you confound me sometimes!