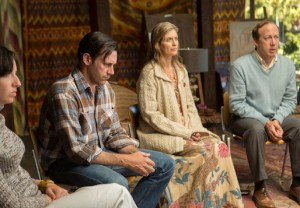 For those of you who need to hear it straight from Mad Men creator Matthew Weiner‘s mouth: Don (and not Peggy) wrote the Coke ad.

“The idea that some enlightened state, and not just co-option, might’ve created something that is very pure” was an attractive way to end the series, Weiner said. “To me, it’s the best ad ever made, and it comes from a very good place.”

The assertion was one of the highlights of a public conversation Weiner had with A.M. Holmes (The L Word) at the New York Public Library on Wednesday evening, four days after his AMC series’ final episode aired.

RELATED Mad Men Series Finale Recap: ‘There Are a Lot of Better Places Than Here’

Weiner conducted no interviews after Sunday’s episode, so the conversation was the first time fans had an opportunity to hear Weiner’s thoughts on the finale.

“I’m so pleased that people enjoyed it and seemed to enjoy it exactly as it was intended,” he said, adding that the episode had been locked down since October.

During the conversation, Weiner shared some of his influences (such as President Richard Nixon and Catholicism) and recent insights about the show’s final hour.

“Don likes strangers. Don likes winning strangers over,” Weiner said. “He likes seducing strangers, and that is what advertising is.”

However, “Once you get to know him, he doesn’t like you,” he said. “I think that’s why he married Megan over Faye.”

Weiner also addressed criticism (like some levied by TVLine) that Don spent too much time away from his New York colleagues in the final few episodes.

“I thought, ‘I want to see Don on his own. I want to see Don out there. I want to do an episode of The Fugitive,'” he said of the series’ penultimate hour, adding that he brought Draper to the Esalin retreat center in the finale because “I liked the idea that he would come to this place and it would be about other people.”

Other insights from the talk:

* If Weiner ever creates a show for a streaming video service like Netflix, “I would try to convince them to let me just roll them out so there’s some shared experience,” he said. “There’s not much left that we have communal now.”

* When Joan got pregnant with Roger’s baby, “I [originally] thought Joan was gonna go through with that abortion,” he said, but conversations in the writers’ room eventually changed his mind. He also said he never conceived Joan as a single mom feminist, but loved that “This woman made a practical decision not to take any s—t anymore.”

* Weiner originally meant to wrap Pete and Betty’s stories in the final episode, but Mad Men co-executive producer Semi Chellas argued that that would be too much in one sitting. “She was totally right,” he said.

* Don’s finale attire was a look that Mad Men costume designer Janie Bryant had been holding for a while. “Don Draper in jeans… we’ve never seen that,” Weiner said. “He is definitely out of uniform.”

* The only unscripted line that ever made it into the episode, Weiner said, was Don saying, “Sweetheart,” to one of the ladies to get the lights during an ad pitch in an early episode.

* Though Weiner had known for seasons that the end of the series would feature the Coke ad and Betty’s cancer diagnosis, the same can’t be said of one other huge, fan-satisfying development. “I didn’t know Peggy and Stan would end up together,” he said. “That had to be proved to me.”

Watch Weiner’s talk in full below.