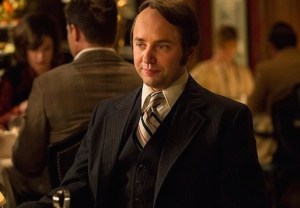 If you had told me, during Mad Men‘s can’t-miss-it earlier seasons, that the second-to-last episode of the series would feature Don getting beat down by a bunch of yokels, miles from anyone he knows, I would’ve told you to stick your Butler Footwear somewhere the sun don’t shine.

But here we are, stuck in a no-tell motel in the middle of East Bumbletruck, watching Draper get conned down by a kid — and not in a terribly compelling fashion — and the series finale is a mere week away. Oh, and Pete and Trudy are reuniting and Betty’s dying. I’m not sure which development makes me cry harder.

Up is down, down is up, dogs and cats are living together and we’re reviewing what happens in “The Milk and Honey Route.”

PHOTOS Memories From the Set: Patrick Fischler Reflects on Mad Men, Lost, Once Upon a Time and Other Roles

FINE, ACCOMMODATIONS | Don wakes from a dream where a cop is telling him “You knew it would catch up with you eventually,” and we see that he’s in a motel room… somewhere. He calls Sally at school and they talk about how she’s quitting lacrosse and making plans to go to Spain. (Side note: Study in Spain? It’s not clear.) Their conversation is cute; she teases him about how boring his road-tripping plans sound, and they end on a good note.

Don’s car breaks down the next day. While it’s fixed, he stays at the nearest accommodations: a motel run by a husband-and-wife team who seem very kind and not at all like they’d break into your room in the middle of the night and beat you up. The room cleaner — a lanky teenager named Andy — says he’ll help Don get some booze but then jovially requests double the original price upon delivery. Seeing as how there’s nothing to do in town but go swimming in the motel’s in-ground pool and read paperbacks former guests have left behind, Don grudgingly pays up.

OUT WITH IT | Don so charms the motel owner and his wife, he gets an invitation to drink at the American Legion once they realize he’s been in the military. It seems like Don won’t go — his car is fixed, after all, and he’s free to leave town — but at the last minute he shows up at the hall, looking like a million damn dollars. (Unfortunately, that will bite him in the seat later.) The evening is a fundraiser for a member whose kitchen burned down, and after the motel owner shames Don into dumping a bunch of cash into the rescue fund, he starts introducing him around.

Of course, the moment that the men start plumbing Don’s service history, I’m sure that someone who served with him in Korea will happen to be there to out him as Dick Whitman. But even when David Denman shows up as a fellow Korea vet, all that happens is that Don gets more and more drunk as the evening progresses.

One incredibly tame stripper performance and several cans of Lone Star later (wait, wait, I know this one: Time is a flat circle! What do I win?), the guys are talking war horror stories. After one man assures them all, “You just do what you have to do to come home,” Don blurts, “I killed my C.O.” and I think, “Sweaty, forelock-askew Don, this isn’t going to go well for you.” But I’m totally wrong. Even after Draper admits to accidentally blowing his commanding officer to the PX in the sky, the men totally understand, and they end the evening with a drunken chorus of “Over There.”

RELATED Your May Finales Calendar Is Here! Find Out What’s Ending When

LEGIONNAIRE’S DIS-EASE | Cut to sometime before the next morning, when the motel owners and a couple of the guys bust into Don’s room, hold him down and beat him with the phone book (?!), demanding to know where the $500 he stole from the rescue fund is. When he says he didn’t take it, they rough him up a little more and then take his keys.

Don knows Andy, who’s also a busboy at the Legion, pocketed the dough. So when the kid comes by the next day, Don rattles him a bit and demands he give the cash back. “If you keep it, you’ll have to become somebody else. And it’s not what you think it is,” he says. (Side note: I hope, in the future, this kid becomes acquainted with the idea of time travel and has to give serious consideration to the notion that Don was really himself, from the future, sent back to put him on the right path.) Andy gives the money to Don, Don gives it to the motel owners, recovers his car and leaves… with Andy in his car. (Kid needed a ride to the bus stop.)

Imagine Andy’s surprise when Don hands over the keys, giving him the car and saying, “Don’t waste this.” Well OK, bishop-from-Les-Miserables, don’t mind if I do! As Andy drives away, Don sits on a bench on the side of the road, looking happier than we’ve seen him in a long time.

PHOTOS May Sweeps/Finales: 100+ Spoilers and Exclusive Photos on Your Favorite Series’ Season-Enders

BIRDIE GETS KNOCKED DEAD | When Betty collapses on the stairs at her university — and nary a hair on that glorious blonde helmet of hers moves, mind you — it warrants a trip to the hospital. Long, terrible story short: Bets has very advanced lung cancer that has spread to her bones and lymph nodes. (Side note: That scene where the doctor tells Henry the bad news, acting like Betty’s not even in the room? Heartbreaking.)

Henry is a mess; he tells Sally, against Betty’s wishes, and winds up having a breakdown in his stepdaughter’s room at school. Later, Betty informs her daughter that she’s not giving up, she’s just not going to move forward with treatment that might only prolong her life for another (probably painful) year. “It’s been a gift to me, to know when to move on,” Betty tells her daughter, and though the only sympathy I have ever felt for the icy Mrs. Francis came during her Weight Watchers years, I find myself getty very teary as Sally reads a letter her mom wrote to be read after she dies. “I know your life will be an adventure,” it says, and knowing we probably won’t be privy to any of that, either, also bums me out.

The next morning, Betty is back at class, gamely huffing her way up the stairs to lecture. Because if there is anything the former Mrs. Draper is good at, it’s keeping up appearances.

FOOL ME TWICE… | Pete runs into Duck in the elevators at McCann Erickson, and here’s why: Pete is doing some headhunting for Lear Jet. Duck (who’s still drinking, by the way) says he wants Pete to help his candidate get the gig, but he neglects to tell Pete that he’s the candidate. The offer is attractive, but Pete’s got a good thing going. He skips a dinner with Lear to see his brother and parse why they can never be happy with what they have. It’s sad, but it’s helping Pete to a breakthrough, so I’ll allow it.

Duck shows up later, soused but with some amazing news: He spun Pete’s refusal to show up at the Lear dinner as Pete being insulted by a lowball offer, so Lear sweetened the pot in a way that makes Campbell leaving McCann nearly a foregone conclusion. He goes straight to Trudy with the news, even though it’s the middle of the night, and asks her and Tammy to move to Wichita, Ks., with him for the gig. As much as I love to hate Pete, I have to admit, he is smooth here. “I’m not so dumb anymore.” “I want to go everywhere with you.” “Say yes with your voice, not with your eyes.” All of these things he says so earnestly and passionately that you just know Trudy’s going to cave. FOCUS ON THE COMBOVER, TRUDY. THE COMBOVER DOES NOT LIE. And cave she does, kissing him like he won’t be boffing the babysitter six months after they settle in the Midwest.