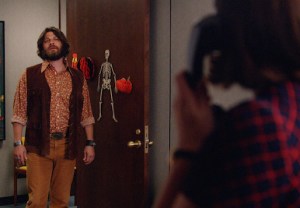 Long before we watched Mad Men‘s Don soak up his first “om,” cast member Jay R. Ferguson was part of a very small, very privileged party let in on a huge secret.

It happened immediately following the table read of the AMC drama’s final episode; everyone who’d been there thought the last scene of the finale would be the camera pushing in on Draper as he sat, legs crossed, and meditated on a California hillside.

RELATED Mad Men Series Finale Recap: ‘There Are a Lot of Better Places Than Here’

But then series creator Matthew Weiner took a group of actors — including Ferguson, who for five seasons played Sterling Cooper & Partners’ bushy-bearded art director Stan Rizzo — up to his office to reveal that the ending in the script wasn’t actually the last image viewers would see. Then he pressed PLAY on his TV, and the “I’d like to buy the world a Coke” commercial started rolling.

“It was like, instant tears. It was a really special moment for me to even be in that room, with those people, to be a part of that. ” Ferguson recalls. “But then, with that came the great responsibility of forgetting that I knew it.”

Easier said than done — especially when Ferguson found himself with one spoiler of an earworm. “I could not stop whistling the song,” he says, laughing. “Rich [Sommer], who was right next to me most of that day… he’d elbow me in the side, like, ‘Shut up!'”

At last, Ferguson can speak freely about the series’ final installment, which saw the romantic payoff to Peggy and Stan’s seasons-long, at-times-sexually-tense friendship. Read on for his behind-the-scenes scoop, including his thoughts on who might’ve really penned the iconic soda commercial. 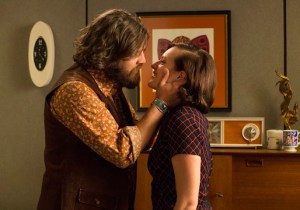 TVLINE | Peggy and Stan getting together was the only thing I wanted from the finale. Have you heard a lot of that kind of thing today?
Yeah, it’s been great. It’s been a tough secret to keep for a long time. It’s so liberating to now be done with worrying about it slipping out in some weird way. [Laughs] Listen, I’d be lying if I didn’t tell you that I was ‘shipping it, as well. Lizzie [Moss] and I both had kind of secretly been rooting for that for a long time, so we were all really happy.

TVLINE | How long did you know that was the way things were going to end for those two?
Not until we got the last script.

TVLINE | Really?
Everybody had their suspicions, and certainly the season before, they had a moment in “The Crash,” when everybody took the drug. Lizzie and I both to ourselves acknowledged that it felt like they were setting something up. You just never knew with the show, because they would set so many things up just as red herrings, you know?

When we started shooting the last season, the first half of it, it was really virtually nothing in terms of stringing that story along. So we both felt — I think I can speak for Lizzie — I know I felt like, “OK, that ship” (no pun intended) “has sailed.” And it’s not gonna happen. Their relationship was so great that either way, I was going to be OK with it. And then when we started shooting the second half of the last season, once we did the episode where Mimi Rogers’ Pima comes in and we have that moment, then I started thinking again, “OK, well maybe this is a possibility.” 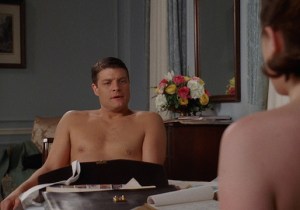 TVLINE | Stan was such a jerk when he came on, so aggressive and anti-Peggy — and there were so many male characters like him that came and went. Did you have any inkling when you started that Stan would be the one with staying power?
Hell no! [Laughs] They told me when I started that I was only going to do a couple of episodes. Because of that and because of the type of character he was back then, it was inconceivable to think otherwise… Really, nobody would be able to tolerate that guy unless they started to change him a little bit. Luckily for me, they did.

TVLINE | Tell me about shooting those scenes, the phone call and the kiss.
It was all the same day… I don’t think we actually rehearsed the dialogue that much. It was perfect. The way we did it was just perfect. Matt really wanted it to be a certain way and Lizzie and I, we would run lines all the time, but I don’t think we ran lines with that one. We knew we were going to be doing it a bunch of times — and we did. We shot the hell out of that scene. It was hours and hours. It took up a good portion of the day that day. I think we did her side and the kiss first, and then we did my side, if I remember right.

TVLINE | Were you each reading your lines for the other during the phone part?
Oh yeah. Always on that show, even if you only had one line. Listen, there’s a laundry list of [reasons] why that show was exceptional, from an actor’s standpoint. But one of the main ones is how everybody was so professional. So when you had a scene like that when you were on the phone, whoever the actor was that you were working with on the other end of that line would come in, even if they weren’t working that day, just to be there for you… So yeah, Lizzie was sitting right off camera for me, but hidden from view, and I was doing the same thing for her.

TVLINE | There’s a sweetness to the resolution of their storyline. They kiss, but unlike everyone else on the show, we don’t see them hop into bed.
It certainly is a lot sweeter [than other pairings], no doubt about it. But I’m not sure that anybody would want to see what Stan and Peggy in the sack looks like. [Laughs] I mean, maybe the Peggy part would be fun, but the Stan part, I don’t know. It looks like that would be a mess.

TVLINE | While we’re on the topic of Stan as a sex machine, can you tell me why his girlfriend always had her nursing cap on?
Did she never take it off? [Laughs] Hey, listen. Maybe that’s why they were together. She was just as dedicated to her job as I was to mine.

TVLINE | What do you think Stan and Peggy’s future would look like?
Oh man. The romantic in me of course would love for them to make it. It seems like it’s a relationship that’s going to require a lot of work. It’s hard to imagine Peggy having another kid, but maybe she would. I’d like to believe that they make it and they go on to become some sort of boutique, powerhouse agency.

TVLINE | Are you aware that some fans online are saying they think Peggy wrote the commercial, and not Don?
Interesting.

TVLINE | Thoughts on that?
I would love to believe that that’s true, because that means that maybe I had something to do with it, too! [Laughs]