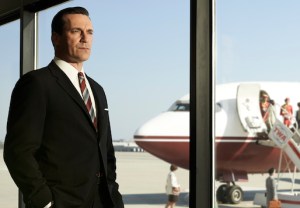 Not so fast. When the topic of spinoffs came up during Mad Men‘s final Television Critics Association press tour panel on Saturday — and star Jon Hamm jokingly suggested the aforementioned title— creator Matthew Weiner weighed in on a possible offshoot to the AMC drama.

“I can’t wait for people to see [the final episodes],” he said. “It’s going be weird to actually get to the point where there is no more new ones. The spinoff, right now, is these last seven episodes, as far as I’m concerned.”

Weiner noted that the back half of the series’ swan song will “advance the story in a different way.”

“The last seven episodes, each one of them feels like a finale,” Weiner continued.

With the show’s end imminent, Hamm took time to look back — and to his jobless future. “So looking forward to being unemployed,” the actor joked. “So happy not to see any of these people ever again, and all of that is really great. Hashtag sarcasm.”

On a more serious note, “There’s no version of this ending that is not super painful for me,” Hamm added.

The experience was an emotional one for co-star January Jones, as well, especially when she received the series finale script.

“The last week, I was a mess,” she said. “Anything made me cry. It’s a beautiful story. It’s perfect, in a way. I read it over and over again. Sometimes I still read it, like on a Thursday afternoon.”

Elisabeth Moss also gave the conclusion a rave review. “I was surprised in the best way and just really, really happy with it,” she shared.

As for the conspiracy theories about Megan’s possible connection to Sharon Tate, which the creator has refuted, Weiner has no complaints about viewers reading too much into it.

Still, “I would not add a person who was not murdered by the Manson family into that murder,” he said.