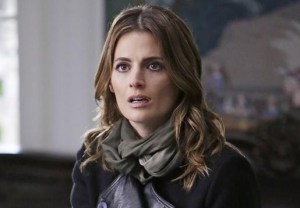 As TVLine wondered in our most recent 20-ish Questions column: Had Castle‘s Stana Katic not re-signed for Season 8 (as she did barely a week ago), what would the ABC drama possibly have looked like moving forward?

As luck would have it, we had opportunity to pose that very question to Alexi Hawley, who is returning to Castle as co-showrunner, alongside fellow series vet Terence Paul Winter.

“There’s always a Plan B,” Hawley said when asked if there was in place a means to abruptly write out Detective Kate Beckett, who as Season 7 closed was pondering both her professional (a run for state senate?) and personal futures. “But it would’ve been a fundamentally different show, and that would’ve been quite a mountain to climb.”

Acknowledging the obvious — that the Rick Castle/Kate Beckett relationship “is very much at the center of the show” — Hawley, whose Castle resume includes a Seasons 2 through 4 run as a producer, opening with a stint as executive story editor, said with a laugh, “I’m thrilled not to have to come up with a show that doesn’t include Stana. That’s a high-wire act.”

As for what he and Winter do have on tap for Season 8, as they replace showrunner David Amann (who himself succeeded series creator Andrew W. Marlowe a year ago), Hawley said, “It’s very, very early days,” especially given that he’s still “closing up shop” on Fox’s recently cancelled The Following (where he served as co-showrunner).

“At this point, we haven’t even sat down and talked about it yet,” he said. “Fundamentally, Beckett and Castle’s relationship has room to have movement in it. So for me — and I can’t speak for Terence — we’re just excited to go in there and see what the future holds.

“ABC just really wants to tell good stories,” Hawley noted. “And I think there’s still a lot of great stories to be told.” (With reporting by Kim Roots)