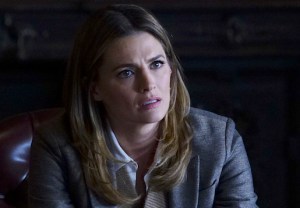 The Castle Season 7 finale on Monday night resolved some unfinished business from Rick’s past while introducing a huge new question about Kate’s future.

When a woman, Emma, is fatally hit by a truck after being chased through the woods, the crosses carved onto her face evoke for Rick a formative moment from his childhood — especially when a description of the masked figure in black who was after Emma exactly matches the killer an 11-year-old Castle had the displeasure of coming across more than 30 years ago. “It was real,” adult Rick realizes, having never been able to make hay of what he witnessed back then, in Hollander’s Woods. (In fact, it was the fear of having the dark tragedy “feel real,” he explains, that kept him from ever sharing this experience with, among others, Kate.)

Turns out that Emma had been looking for her friend Zoey, who had gone missing and was last seen getting into a white sedan with the letters X and Z on the plate. Deducing that this killer has for god-knows-how-long targeted women who “won’t be missed,” Rick decides: “I need to end this.” The first lead brings them to Noah, a onetime mental patient who has been tending to his sick (as in: long-dead) mother. But no evidence links the loon to either Emma or Zoey.

Meanwhile, Beckett is mysteriously called on the carpet at One Police Plaza by Lance Reddick, who questions — more like scoffs at! — her ambition to make captain. Reddick recounts the many times over the years Beckett has crossed lines and run afoul or procedure to get the job done, questions her partnership with Rick and even casts aspersion at her inspiring the Nikki Heat character. Kate, though, doesn’t shrink away from the accusations, but instead turns heel and declares, “You’re wrong, sir,” maintaining that she has repeatedly brought killers to justice with nothing but respect for the law and her department. That she is proud to be Castle’s wife and inspiration. “I don’t cross the line — I put myself on it,” she trumpets.

And it turns out… she was just being Willy Wonka’d! Gruff Lance Reddick isn’t out to get her but “audition” her, to test her resolve, because he senses she wants a “bigger stage” for her talents — and he has one in mind, on the New York State Senate. Afterward, at the swings, Kate says to Rick, “I’m a cop, not a politician,” and frets that he, Martha et al “would all be fair game” if she ran for office. Besides, having aced her captain’s exam, she could have her own precinct by the time Season 8 is over. Whatever her decision, “I will back your play,” Rick makes clear.

Back to the COTW: Noah’s shrink, Dr. Holtzman, stirs something in Rick, who recognizes the voice from when he was 11. But that of course, all by itself, is “nothing to go on,” Kate notes, prompting a miffed Rick to remark, “I expect that from [Ryan and Espo], but not from you.”

Beckett apologizes, then digs up for Rick the location of some farmland that Holtzman inherited, not far from where Emma got run down. Arriving at the doc’s barn, Beckett stays back — being a cop without a warrant and all — while Rick snoops. Inside, he finds the car, the mask and Polaroids of the ritualistically carved women. He also finds the killer, Holtzman, who lunges at and pins down Rick, holding a knife to the writer’s throat. Holtzman begins to draw blood, Rick struggles to fend him off, all while Beckett is trapped outside. Rick then spies a gap under the barn door, juts his hand out, Kate hands him her gun and Rick whips it inside with him to put several bullets into the shrink’s belly.

The finale ends at a gala where Rick receives from peer Michael Connelly the Poe’s Pen Career Achievement Award. In his speech, Rick pays tribute to Martha and Alexis aka his “redheaded pillars of unconditional love,” the friends and “brothers in arms” at the 12th who “let me in,” and of course to wife Kate.

What did you think of the Hollander’s Woods tale, and the choice now facing Kate?