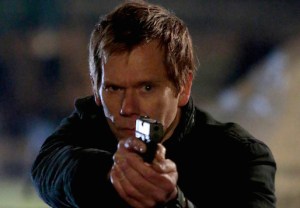 Warning: The following contains spoilers from The Following‘s series finale.

It’s a good thing Ryan Hardy has a pacemaker, because after the devastating events of The Following‘s series finale, his heart is going to need a lot of help to keep beating.

“Did you expect anything less?” executive producer and co-showrunner Alexi Hawley asks, laughing.

RELATED The Following EP: Here’s How Season 4 Might’ve Played Out

For those who didn’t watch, a quick rundown: Kevin Bacon’s perpetually beleaguered FBI agent wound up in a standoff with Theo, who was holding Gwen captive. A shot to the head took Theo out, and it looked like Gwen, Ryan and Baby Hardy were about to have a happy ending… until Theo rose up (!) and tussled with Ryan until they both went over the side of a bridge.

At the end of the episode, Ryan was missing, but the audience learned that he’d decided to play dead in order to keep his loved ones safe/get revenge on the larger organization of elite serial killers that was controlling Theo.

“What we took into the finale was this question, which he’s been struggling with [from] the beginning,” Hawley says. “‘Can I be happy? Can I have a life outside of this obsession?’ At the end of the day, given everything he’s been through, he realizes he can’t — which is a tragedy.”

TVLine asked Hawley a bunch of questions about the cancelled Fox thriller’s final outing, including our biggest beef: Where did Ryan’s vision of Joe go? Read on for his answers.

TVLINE | Annet Mahendru’s Eliza was going to be the first face of next season’s big bad. Would the person Eliza was on the phone with have been someone we would have recognized?
No. The level over Eliza is not anybody we’d seen before. Honestly, she wasn’t necessarily even talking to the big bad. The same way that Lisa Campbell was co-opted by Eliza, there is somebody bigger than Eliza who is middle-management, that kind of thing.

TVLINE | You shot multiple endings last season. Did you do it this year?
No, we didn’t do it this year. We felt very strongly that this was the ending we were driving towards. Whether he let go on that bridge on purpose or whether he slips is meant to be a little bit up in the air, but ultimately, when he comes out of that water, he knows what he has to do… It’s the ultimate sacrifice that Ryan is making. He’s sacrificing his own happiness, his own chance at a fulfilling life, for the people he loves — which is a very selfless act.

RELATED American Idol: How Fox Failed Its Golden Goose — and Why Now Is the Time to Pull the Plug

TVLINE | Mike nearly dies in these episodes. Did you ever think of killing him — or any other character — in the last few hours of the series?
Well, we killed a lot of people. We did. Our body count is pretty high. And it was because the storylines were coming to an end. Obviously Mark/Luke were two of the most compelling characters The Following has ever had. [Mark and Luke] — and Daisy felt the same way — they only know themselves as part of a pair. For Mark, what is life without Luke? …At the end, what is there after revenge? There is nothing after revenge. I don’t know if you noticed, but there is a little bit of a smile on Mark’s face when he dies because he feels like he killed Mike, and that’s what he really wanted.

With Mike, I keep saying it’s the meanest thing we’ve ever done on the show, to have that moment between Mike and Max and then stab the s—t out of him. But I feel like that’s the show, right? You’re never gonna see it coming… You do go out of the finale knowing that Mike and Max are now forever together. They weathered the storm and now true love has come through.

TVLINE | There’s no Joe Carroll in these last few episodes. Why?
Originally, when we were planning out the end of the season, we had this idea which I think was pretty compelling that after Joe dies, he becomes Ryan’s manifestation of the devil on his shoulder. Joe encourages him to do things which are self-destructive… But we wanted him to go down the dark path and then come out of it. We didn’t want to take that through all the way to the end. I’ll be honest: After we shot Episode 10, where Joe died and it was so compelling, I was a little unsure whether we should abandon ship on the he-sees-Joe-afterwards. It was such a powerful ending. But I feel like, especially in Episode 12 where Ryan was really going off the deep end with the waterboarding of Penny, and Joe was there, I felt like it was really powerful in and of itself. And you know, endings are tough. How do you have Joe leave without it seeming goofy? I felt like Ryan needed to make a choice to be the better man, to fight to be a better man, as Gwen said. 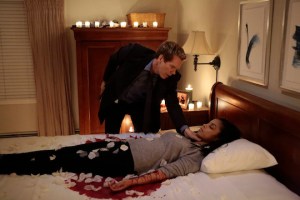 TVLINE | At the beginning of the season, you’d said that the show was going to take a step back from the overt violence and gore, but at times, it seemed like that decision had been reversed. I’m thinking specifically of when Theo kills his wife.
We definitely, going into the season, wanted to try and make the violence more impactful when we did it rather than just having a lot of it. I do think at the end of the day there were times, like the box [in Episode 2], where we didn’t actually show you anything. We made you do the work in your head, which I’m really proud of…

We definitely talked about Theo’s family. There was a version, early on, where Theo killed everybody. The kids did not survive… But at the end of the day, we needed Theo to be a character like Joe Carroll who you could root for even though you felt like you shouldn’t. Killing his kids is such a powerful thing that we felt like there was no coming back from that. We definitely are a violent show, and we try and use it effectively as possible.

Grade The Following series finale via the poll below, then hit the comments to elaborate on your pick!