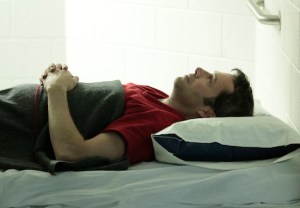 Live by the shocking death, die by the… well, you get the point.

Even though Fox’s The Following had — for the better part of a season — told us that convicted serial murderer Joe Carroll would meet his end via lethal injection, the character’s exit in Monday’s episode still came as a jolt to the Following faithful.

After all, he’d cheated a near-certain ending at least once before, right?

RELATED May Sweeps/Finale Preview! Get 100+ Spoilers and Exclusive Photos From Your Fave Shows, Including The Following

“For the first time, The Following actually did what they said,” James Purefoy tells TVLine, chuckling. He’s calling from Baton Rouge, La., where he’s just begun shooting Sundance’s upcoming Hap and Leonard. “They didn’t pull the rug out from underneath you and do something unexpected. They said, “He’s dying — and he really is gonna die.’ I think a lot of people thought they were lying. No, no; he died.”

For those who missed the episode, on the morning of Joe’s scheduled execution, he combined a convenient shiv with a momentary distraction to create a situation where three people’s lives were at stake — unless Ryan Hardy acquiesced and went to the prison to witness Joe’s last moments.

Of course Ryan did, and of course Joe made him submit to some deep psychological digging. (Hardy even admitted to being satisfied by the act of killing his father’s murderer and the man who ended former FBI boss Debra Parker’s life.)

Finally, Joe released the hostages and surrendered to authorities, who went through with plans to put him out of cunning commission for good. His final words were a quote from his beloved Edgar Allan Poe: “Quoth the raven, ‘Nevermore.'” (And if you want a more detailed rundown of events, check out our episode recap.)

Purefoy says he knew about his character’s imminent end “all the way through” this season, which meant he often had to lie when asked about what was coming up.

RELATED Your May Finales Calendar Is Here! Find Out What’s Ending When!

“I’m not a politician,” he says, laughing. “Nothing really matters that comes out of my mouth. I can do that.”

The actor cites last week’s episode as one of his favorites from the series’ run, particularly for the way it allowed the longstanding Joe-Ryan dynamic to play out.

“It becomes a very textualized and multileveled relationship, which is such a lovely thing as actors and particularly with the legend that is Kevin Bacon who never once blocked or pushed away anything that was uncomfortable or weird or strange,” Purefoy says. “He accepted and embraced everything with an open heart and an open mind.”

Those who have seen the thriller’s alternate Season 2 ending, which never aired, know that Joe also died in that version of events — though being cut down by a bullet from Mark’s gun left little time for the prolific serial killer to utter any last words. 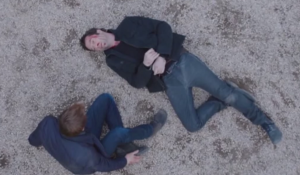 “Actually, there were final words” in that scene, Purefoy says. “They just chose not to include my improvisation.”

Naturally, we demanded to know what Alternate Ending Joe had said to Ryan, whose hand he clutched as he shuffled off this mortal coil.

“I think it was something with Ryan looking into my eyes, because Joe has an obsession with what’s going on in people’s eyes as they’re dying, because he believe that to be a great thing of beauty,” Purefoy recalls. “I think my final words were” — and here he lapses into a dramatic whisper, “‘Ryan! Can you see it? Can you see it?'” that ends in a laugh. “I think he would have been curious to see whether Ryan could’ve seen what he could see when he saw people die.”

This time around, Carroll went on to meet his maker with no improv on Purefoy’s part. “That was all scripted, and it was very fitting,” he says. “I’m not sure it could’ve been much better than that.”

And Joe’s appearance in Ryan’s vision at the end of last week’s hour might be a harbinger for the season’s final two episodes, Purefoy teases: “I think [Joe] might be making a little appearance, once or twice.”