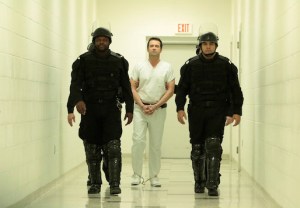 The following recap contains spoilers from Monday’s episode of The Following.

“Quoth the raven: Nevermore.” And boy, does that bird mean it in regard to this week’s episode of The Following… as in, “Nevermore will Joe Carroll terrorize Ryan Hardy, because he’s very, very dead.”

After three seasons, many victims, countless liters of blood and one risen-from-the-ashes comeback, the Edgar Allan Poe-quoting serial killer made like Annabel Lee and died.

For good, this time. Here’s how it all goes down.

PHOTOS May Sweeps/Finale Preview! Get 100+ Spoilers and Exclusive Pics From Your Favorite Shows, Including The Following

On the morning of Joe’s execution, he wakes grasping the glasses-turned-shiv he grabbed off last week’s victim. Once transported to the room where he’s scheduled to die via lethal injection, he uses a moment of distraction to kill two guards (one by exuberantly tazing his eyeball) and take three hostages: a doctor, the governor’s chief of staff and Joe’s young lawyer.

Joe broadcasts his demands directly into the FBI command center, because apparently everyone can do that: If Ryan doesn’t arrive at the prison within two hours, Prof. Carroll decrees, hostages will die.

So of course, Ryan hightails it the Virginia penitentiary. Gwen — whom last week we learned was pregnant — calls and tearfully begs him not to acquiesce to Carroll’s demands, but Ryan assures her all will be well… and hangs up before she can tell him she’s got a little Hardy in her oven.

Joe releases the doctor in exchange for Ryan’s entrance, but after tazing Ryan into unconsciousness, Joe strings him up with wire and demands that he admit that Joe is “the only one who knows the real you.” After all, “You have always been my most devoted follower.”

There’s some threat of violence and a lot of manly whispering, then pretty soon Ryan is admitting that he dreams of Joe and that he felt satisfaction when he killed his father’s murderer and Debra Parker’s killer. Both men are near tears as Joe releases Ryan and surrenders, saying he can die now that he knows they’re bosom friends or something like that.

Elsewhere, Theo rescues his sister from a drug den. Once she’s conscious again, he tells her he’s trying to decrypt one of Strauss’ notebooks to get the name of someone who can help him disappear again. But first, he needs to take out Ryan. Sis thinks this is a bad idea, so she uses his computer to hack into the prison mainframe and unleash all of the other inmates on death row — hoping that they’ll finish off Ryan so Theo can stop obsessing, I guess?

A lot of bloody fighting later, Ryan has felled all of the other inmates except one: the one who’s choking Joe to death in his cell. Though Ryan hesitates, he stops the choker, then guards rush in and grab Joe. Ryan says he’s fine. I’m no doctor/psychiatrist/pacemaker expert, but I’m going to wager he’s not.

Ryan decides to stay for the execution, after all. And because he’s a glutton for punishment, he visits Joe one more time. “I can die, knowing that I will live on through you,” Joe tells him. Then, all that’s left is for Joe to be strapped to the table, where he gazes at Ryan as he utters his last: “Quoth the raven: Nevermore.” (C’mon, what else would he say?) When it’s all done, Ryan — a recovering alcoholic, you’ll recall — visits a local bar and orders two shots of whiskey, sends a call from Gwen to voicemail, and slugs back the drink while imagines that he’s hanging out with Joe.

I leave you with the words of Following showrunner Alexi Hawley. When I spoke with him earlier this year, I couldn’t stop myself from asking whether all of these nods at the Joe-Ryan relationship — the dreams, the language Joe used to talk about Hardy — were building to something bow-chicka-wow-wow-ish. “I do know what you’re saying. We are conscious of that idea, and yes, there was a line about foreplay if I remember right in [one] episode,” Hawley told me. “Look: These people are incredibly connected in a way that makes Ryan Hardy uncomfortable, because Joe’s not wrong. There is a special relationship between these two guys.”