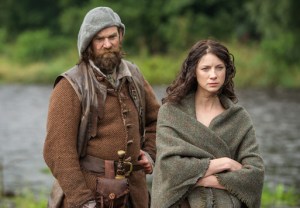 If you’ve ever watched Outlander‘s curmudgeonly Murtagh grumble his way through a scene and thought, “That character would be so much better if only he danced around a bit,” this week’s episode is for you.

If you’ve ever studied Claire and thought, “You know what she needs? Some ill-fitting men’s clothing and a jaunty tune,” you’ll love “The Search.”

But if you’re wondering where in God’s green Scotland James Alexander Malcolm MacKenzie Fraser has gotten off to, well, you’re going to have to wait a while, lads and lassies.

At first, I planned to rail against the changes in Claire and Murtagh’s journey, which unfolds quite differently than it does in the novels. But then I thought that would be very bookist of me, and because we welcome both oldlanders and newlanders in this recap, I’ll just shut my face and we can talk about it like civilized adults later, aye?

Read on as we review what takes place in “The Search.”

OUTTA HER WAY | Fresh off the knowledge that Jamie’s been captured by the British, Claire springs into action, declaring, “I intend to get my husband back.” She’s a flurry of brown curls and determined fury as she forbids an injured and prosthetic leg-less Ian to accompany her. He draws her a map, instead, but Jenny knows that her sister-in-law doesn’t know the land near Lallybroch and couldn’t track her way out of a burlap sack. So the new mom packs some heat and prepares to join the search — and Claire grimly realizes that Jenny’s right. As they take off on horseback, I say a little prayer for Jenny’s delicate areas; lots of time in the saddle a few days after childbirth can’t be fun.

On a related note: Galloping away with a chestful of wee Maggie’s nourishment also isn’t comfortable, which is why Jenny stops after a while to express some milk. And because this is Outlander, of course we see it in all of its detail. Claire’s as entranced as I am — though she’s likely wondering less about CGI techniques — but shakes herself out of it to announce her plan: She’s going to find Randall’s superior, one of the guys who liked her at the Fort, and ask him nicely to let Jamie go. “Sounds more like a prayer than a plan,” Jenny scoffs, and even when she is spouting breastmilk like an overfilled wineskin, she’s so much cooler than I’ll ever be.

Jenny’s plan proves much more efficient: Once they isolate one of the Redcoats traveling with MacQuarrie, she pretends to swoon, then Claire creeps up and holds a gun to the soldier’s head. Once the soldier is tied up, Jenny heats a brand and holds it to his foot (!) to get him to talk; turns out, he’s a courier who has a dispatch mentioning Jamie’s escape from the captured raid party. Secure that her brother has hidden himself deep in the Highlands, Jenny rips up the missive and prepares to kill the Brit. Claire argues against it, and they’d probably still be going at it today but Murtagh sneaks up and swiftly offs the Redcoat by slitting his throat. As the trio make camp for the night, Claire seems almost ashamed to admit that she would’ve killed the soldier if Murtagh or Jenny hadn’t. 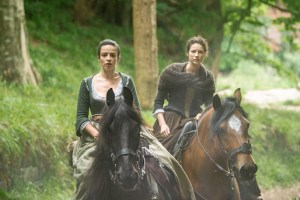 DANCIN’ FOOL | In the morning, Jenny gifts Claire with a bag of rent money and a knife to be carried in her stocking, and Claire tells Jenny to “plant potatoes,” because famine and war are on their way. It’s a cuckoo thing to say, but having been briefed by Jamie that Claire has a sense of what’s to come, Jenny agrees — then the two women hug and Jenny leaves, knowing her sister-in-law will do whatever’s necessary to bring Big Red home. (Aww.)

As far as plans go, Murtagh’s is… laid-back. He thinks if he and Claire travel around enough, with her healing people and reading palms and him dancing (yes, you read that right) along the way, Jamie will hear about them, come out of hiding and find them instead of the other way around. But no one at any of the stops has seen a “very tall, strapping, redhead man,” and the only thing Murtagh’s dance gets him is booed off stage. (Side note: I feel the need to describe Murtagh’s rug-cutting. It is so awesomely atrocious. It lacks feeling and rhythm. He is supposed to be performing a majestic Highland sword dance, but all that comes to mind is Numfar and his dance of joy. )

Claire agrees with me, but when she suggests he “jazz” up his act a bit, she winds up on stage, dressed as a boy, singing a dirty ditty to the tune of “Boogie Woogie Bugle Boy.” (“A Sassenach lady dressed up as a lady, singin’ this bawdy song” will draw more attention that their old act, her traveling partner argues.) The more villages they visit, the more Mrs. Fraser gets into the act, and pretty soon the Claire & Murtagh Dark Side of the Pantaloon Tour is rolling right along.

MURTAGH, YOU MINX | All goes well until the pair realize another troupe has stolen their act — and is doing it better. This causes confusion, you see, because Jamie won’t know which troupe to follow. Claire gives the super shady gypsy ringleader of the rival group the rent money to promise his singer won’t do the tune again; Murtagh thinks that’s insanity (I do, too), and he and Claire have it out one night as they camp by the ocean. She argues that he has no idea what she’s going through. “You’ve never lost someone that you loved,” she cries. Better grab a blue composition book and sharpen a No. 2 pencil, Claire, because you’re about to get schooled.

Murtagh says he lost someone at a MacKenzie gathering years ago. When he killed a boar using just a dagger, his bravery was rewarded with the animal’s tusks — which he had made into bracelets and which he gave as a wedding gift to the lady he loved but could not have. Wait a tick… Claire pulls the bracelets Jenny gave her last episode out of her bag, the ones that belonged to her mom. “It was you?” she asks incredulously. Yep, Murtagh was once in love with Jamie’s mother, Ellen, and he cries as he says he loves Jamie, too. “He’s a son to me,” he sobs, and she hugs him and cries, too. Great, Claire. Now you broke Murtagh.

THE DOUGAL YOU KNOW | Not long afterward, Murtagh and Claire run into the gypsy, who gloats that he completely reneged on his promise: His troupe has been performing the song all over the place… and he has a message for them about Jamie! So Claire and Murtagh run to the place the gypsy sends them, only to find Dougal standing there like a smug, bald bulldog. “Sorry to disappoint ye, lass,” he says, then quickly delivers news of Jamie: Young Fraser, drawn out by the song, was re-captured by the British and taken to Wentworth Prison. He’s already stood trial for his crimes, and he’s been condemned to hang within a day or two.

No wait, Claire, your fun hasn’t ended yet! Dougal takes her aside and tells her to let Jamie go, because “I can protect you, as your husband.” She’s appalled, he’s pragmatic: She’s basically a penniless, English soon-to-be widow with no protection from Jack Randall. But she eyes him shrewdly, suddenly realizing exactly what he wants: “Lallybroch. That’s what this is all about. You want to control the Fraser lands.” Dougal’s argument: Jamie would want it that way. Ick.

They eventually strike a deal: She can ask his men to help her break Jamie out of jail, though Dougal won’t make any of them do it. And if they find Jamie dead, “Then I’ll marry you.” Meanwhile, I’ve spent the past five minutes of screentime sweating. Will ye not get going already, Claire?!?

Though the men initially are hesitant to gallop into danger, Willie, Angus and Rupert eventually agree to join Claire and Murtagh on their mission. So the five of them end the episode on horseback, Wentworth Prison just coming into view. Gulp.