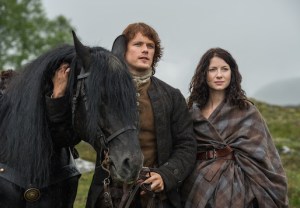 Jamie acts like a right arse in this week’s Outlander — and that’s a good thing. Here’s why.

Aside from sending some rather mixed messages to Laoghaire, Claire’s husband has made all the right moves in the short time we’ve known him. He’s deftly navigated complex clan politics. He’s landed a smart, hot, capable wife. He’s even believed the most unbelievable of stories — that Claire is a time-traveling nurse from the 1940s — with a wry grin and a love-endures-all attitude. We’ve rarely seen him make a misstep; the guy is on point.

That is, until he returns to his childhood home. It’s nice to know that even the unflappable Mr. Fraser reverts to being an insecure, slightly annoying teenage version of himself after spending even the smallest amount of time with the people who’ve known him since birth.

Showing us Jamie’s flaws makes him more relatable, and that makes him seem even more like a flesh-and-blood person than a romance-novel hero… which in turn makes him so. much. hotter. Well played, Ron Moore.

Let’s take a look at what happens in “Lallybroch.”

HOME SOUR HOME | Post-Claire’s decision to stay in the past, Mr. and Mrs. Fraser are a little giddy. But as they draw closer to Lallybroch, the Fraser family home, Jamie darkens. He can’t stop remembering his last time there, when Randall whipped him and then raped Jamie’s sister, Jenny.

Jamie grimly informs Claire that Dougal said there were “rumors” that Jenny had gotten pregnant after the incident. Claire points out that rumors aren’t facts, but when they run across a little boy playing in front of the home, Jamie’s brows are knit together so closely in anger, Claire could wear them if she ever loses that gorgeous cowl. (Sidenote: Book readers, Lallybroch looks much grander than I’d imagined. How did it match up to your expectations?)

Jamie perks up when Jenny comes out, drops her basket, grabs her pregnant belly and runs to him. They embrace, but the happy reunion is cut short when Jenny proudly introduces the boy as her son, who’s named after his long-absent uncle. There’s barely time for Jamie to introduce Claire as his wife before the Fraser siblings get right down to some very ugly, long simmering business. 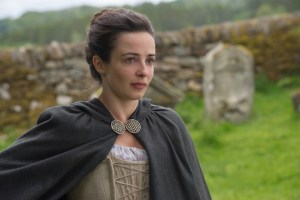 He insinuates that the rape turned her into a loose woman and that naming the child after him is a terrible insult. She calls Claire a “trollop” (!) and brings up the fact that she hasn’t heard from him in four years. Then Jenny talks about grabbing her brother by the testicles — Claire’s “what the heck have I gotten myself into?” face at that moment is amazing — to really get his attention. It’s all diffused (slightly) when a man with a peg leg arrives and calmly announces himself as both of the children’s father: It’s Ian, Jamie’s old friend and Jenny’s husband.

THE WHOLE TRUTH | The tension doesn’t ease when everyone moves inside. Ian, echoing my approach to dealing with uncomfortable family gatherings, makes sure the hard liquor is easily available. Jamie steels himself and asks about exactly what happened when Randall took Jenny in the house that terrible day, which leads us into her flashback of the event. Misstress Fraser thinks quickly and brains the captain with a heavy candlestick while he’s making her fondle his fly, but all it does is make him angry. He throws her around the room a bit, then tosses her on the bed and tries to “make himself ready,” Jenny recalls. And… wait a minute, is that…? I’ll just read you my notes, verbatim, from this part of the episode: “OMG TOBIAS MENZIES’ PENIS WHAT.” Yep, we see Capt. Randall’s little Redcoat a few times during the horrible scene.

Jenny relates that when she started laughing at his inability to stand at attention, so to speak, it made him mad. So she kept doing it, and though he eventually knocked her against a bedpost, rendering her unconscious, he did not, in fact, rape her. When she woke up, he was gone.

RANDALL RUINS EVERYTHING | You’d think that after hearing what his sister went through, coupled with the relief that his worst fears hadn’t been realized, would make Jamie soften and apologize. You’d be wrong. Meanwhile, here’s a list of things Jenny is not psyched about: Jamie’s chumminess with the British (i.e. Claire and the Duke of Sandringham), the fact that he and Claire plan to live at Lallybroch, and the notion that she and Ian have to move bedrooms because they’ve been sleeping in the biggest one — the “laird’s room” — and now it’ll go to Lallybroch’s actual laird, Jamie. When Claire protests that they can sleep anywhere, he quickly stifles her, saying that’s how it should be. Jamie, honey, you’ve been master of the house for all of three minutes; let’s just calm down a wee bit, aye?

When they’re moved into the big bedroom, Jamie has a little flashbacking of his own to do. It’s how we meet Brian, his father, and see how he died after collapsing while watching Jamie’s brutal second flogging at the fort. (Outlander, if we’re all very good, do you promise never to make us watch that grisly business ever again?) Even worse, Jamie sadly confesses to his wife, he could’ve avoided the whole thing if only he’d given in to Randall’s request that he “make free of your body.” Claire sympathetically (and probably correctly) says Randall probably would have whipped him anyway. “We’ll never know,” he says sadly.

SIBLINGS SMOOTHED OVER | The following day is Quarter Day, where all of the tenants on Fraser land come to pay rent and party with the laird. Jamie gets drunk on both the free flowing booze and his own importance, grandly telling the poorer tenant they can skip paying their tab this time. When he finally makes it up to the bedroom later that night, it’s a study in how not to get laid. Step 1: Be so drunk you can barely take your clothes off. Step 2: Brag about beating up a tenant (even if said tenant is an abusive father who totally deserved it). Step 3: Repeatedly smack your wife on the hindquarters like a heifer who doesn’t want to return to the barn. Step 4: Pass out, snoring, before anything even remotely sexy can happen.

The next morning’s hangover? Epic. (And the music that accompanies these scenes is pretty great, too.) A grouchy Jamie sets out to fix the property’s busted mill, a bit of housekeeping that I normally would not care about except that it requires him to drop his kilt and dive into the millpond, and suddenly I am really, really interested in 18th-century engineering. When some British soldiers happen upon the scene, Jamie stays underwater (where he somehow loses his shirt) until they leave. He surfaces in the altogether, palms his junk like a street magician playing three card monty and yells at Jenny to look away so he can get out of the freezing pond. She’s affected by seeing the scars on his back for the first time. I’m affected by the sheer amount of man flesh we’ve seen so far in this episode.

That evening, Ian happens upon Claire. Their conversation, in two words: “Frasers, amiright?” Boosted by his insistence that Jenny and Jamie are stubborn beasts, she yanks Himself out of bed and schools him. “You’re trying to be someone you’re not,” Claire says. The words must take root, because he apologizes to Jenny the next day when they both visit their father’s grave at the same time. Then she apologizes for kinda-sorta blaming him for their father’s death, a notion that disappeared when the scars indicated how much he’d suffered. “It’s my fault that Randall beat you so,” she cries in earnest, and Jamie reaches for her and says that everything that took place that day — and everything that followed — was Randall’s fault and no one else’s. Hurt feelings mended, she genuinely is happy he’s back. “Welcome home, laird Broch Turach,” she says.

RELATED The Missing Renewed for Season 2 at Starz

A FIRST | “Broch what?” you may ask. Broch Turach is another name for the estate, and it refers to the circular tower on the property. Upstairs in their bedroom that night, Claire wears a nightgown and a stunningly beautiful shawl (the detail work!) as she listens to Jamie talk about the first time he knew they were supposed to be together. “I wanted you from the moment I saw you, but I loved you when you wept in my arms that first night at Leoch,” he says, all low-voiced and swoon-inducing. (My inner jerk’s commentary: Didn’t stop you from macking on Laoghaire in the hallway that time, did it?) Claire makes a big point of telling Jamie she loves him, and that’s the first time in the series we’ve heard them utter those words, right? (If I’ve gone soft in the heid and forgotten an earlier incident, you can yell at me in the comments.)

The next morning, Claire wakes up all smiley but alone. And that’s because, as she soon learns, Jamie’s standing in the foyer downstairs while a man holds a gun to his head. [Insert Gaelic curse word here.]

Now it’s your turn. What did you think of the episode? Let’s hear about it in the comments!