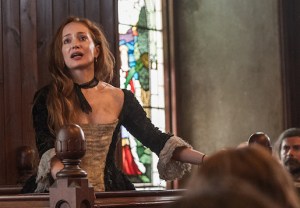 In Sunday’s Outlander, Lotte Verbeek‘s alter ego found herself facing near-certain death for practicing witchcraft. It was an accusation she’d charmed her way out of for years, but when an angry mob made it clear that her days of summoning and potions were over, she did the 18th-century Scotland version of taking one for the team.

“That move she makes makes her utterly vulnerable,” Verbeek tells TVLine. “It really does. It’s a completely different side of Geillis… than we see at first when she’s being a cat playing with a little mouse.”

PHOTOS May Sweeps/Finale Preview! 100+ Spoilers, Exclusive Pics From Your Favorite Shows Including Once Upon a Time, Nashville, Grimm, Revenge and More

The “move” to which Verbeek refers involves Geillis declaring herself the bride of Satan, ripping her clothes off so everyone can see she’s pregnant with The Dark Lord’s spawn (not really) and then creating enough of a spectacle so that Outlander heroine Claire Fraser — who faces the same charges — can safely escape the scene unnoticed. Last we see the redhead, her flair for drama has her carried out of the trial and paraded through the streets, presumably to be burned alive.

On the occasion of Geillis’ parting good deed, we chatted with Verbeek about faux bellies, when that nude dancing scene was supposed to take place, her character’s true feelings about Dougal MacKenzie and when, precisely, Mistress Duncan first knew something wasna quite right about Castle Leoch’s Sassenach.

TVLINE | Did it take a while for you to get a handle on how to play Geillis?
That’s a very good question, because I never really wondered what was right. It just felt surprisingly natural to me [Laughs] to play a character that’s so mischievous and so playful. I wouldn’t call her “mean,” but she definitely likes to poke here and there. So there’s a very nice combination of elements to the character. To me, it came pretty naturally.

TVLINE | You had an impressive baby bump. Talk to me about the prosthetics involved in that, especially because we see so much of you when we see the bump.
There were a lot of hours spent on a table where people were working on my belly, a couple of people who did a great job. I would be surprised sometimes, myself, like ‘I really feel like I’m pregnant right now.’ I’ve never been pregnant, but that looks and feels like what it would be. There’s a heaviness to the [fake] belly. One morning after having shot the same scene for a week — the witch trial took a week to shoot — I would come in in every morning and put on the belly, which took a few hours. That would just be me sleeping for another couple of hours. But I came into the trailer and there were about seven bellies lined up. I should have taken a picture… It was the weirdest thing to see. [The prosthetics artists] were so precise about adding little veins and adding little freckles. The work that goes into that was just phenomenal.

TVLINE | It looks amazing. We see it during the dance in the forest — was it choreographed? Did you come up with it yourself?
It was choreographed. That was such a fantastic scene to shoot. We worked with a choreographer who did a great job. It had to combine a few elements where it would be a ritual and it would be about fertility but it would also be something mystical. There would be dance elements but it also would be earthy and primal, almost sexual. I wasn’t wearing a lot of clothes, either. It was really all about trying to cover up certain areas but also about making sure the belly would stand out at some point. [Laughs] Yeah, there was a lot of work that went into the specifics, technical stuff, really. The set was outside in the forest, at night. It was a summer night in June somewhere. They first wanted to shoot it in February… I was like, ‘No I’ll be fine, I’ll be moving, I’ll be warm.’ Then they said the shoot’s not gonna happen, it’s too cold. And I was glad in the end.

TVLINE | Is Claire right: Is Geillis actually in love with Dougal?
I think so, yeah. Geillis is very passionate. As much as she’s calculating in some ways, she’s also very passionate. She really lives from her heart. She’s very passionate about the cause that she so believes in, that she’s fighting for. And she sees that same passion in Dougal. There’s a darknes sin Dougla that she’s very attracted to. 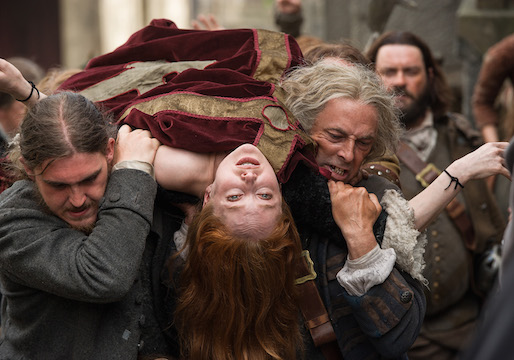 TVLINE | She makes a very altruistic move in the trial scene to save Claire. Where do you think that comes from?
What’s interesting is that, having said that Geillis is calculating, you would maybe never expect her to be so altruistic, right? But, the cause that she’s fighting for is, in a way, altruistic. She’s an idealist. And that’s not how she strikes you at first. You think she might be selfish or she might just be after her own good. But then when she is so altruistic and basically sacrificing herself for Claire, you’ll come to see that she really has come to love Claire. Maybe Claire is her only friend. There’s a loneliness to Geillis as well that makes her want to be friends with Claire.

TVLINE | When would you say that Geillis locks onto the fact that Claire is not from this time?
She knows. I believe she knows from the start. I believe she knows this, and from the moment she meets Claire, she’s just wanting Claire to confide in her which she only does later on. But she wants a certain honesty. But she knows. She always knows.