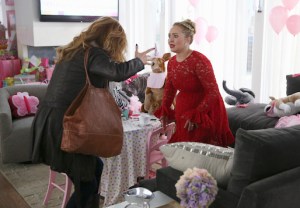 If you had told me, three years ago as we peeked backstage at the Grand Ole Opry, that one day I’d be welling up over the arrival of a baby for the bratty blonde with the too-short dress and the skeezy guy who looked her up and down (while his girlfriend was nearby), I’d have said “Bless your heart” (while thinking you were nuts).

But here we are, Nashville fans, up to our elbows in giant, stuffed giraffes and pink doilies, celebrating the birth of little What About Barkley.

Ah well. As we’re all trying to guess what name Avery and Juliette are going to give sweet baby Thank God It Wasn’t Jeff’s, the rest of us can focus on Sadie’s rather abrupt exit from Music City and Gunnar’s entirely deluded sense of entitlement regarding Scarlett’s feelings. Let’s talk about all of it as we review what happens in “This Just Ain’t a Good Day for Leavin’.”

I SHOT THE DERELICT | The hour begins with Sadie and Luke giving the police their statements about Pete’s shooting. When a not-too-compassionate detective points out that Sadie’s gun was unregistered, Ms. Stone realizes just how screwed she might be and uses her one phone call to tearfully beg Rayna for help.

Rayna’s had an emotionally exhausting night with Deacon and the girls, and she’s supposed to throw Juliette’s baby shower later that day, but she drops it all to run down to the police station — lawyer in tow — and haul Sadie’s shellshocked butt outta there. Back at Rayna’s house, Sadie sips tea on the couch and I marvel at how Sadie’s eyeliner is still perfect despite the fact that she’s been crying for 12 hours straight. (Side note: I hope Nashville had an on-set medic hook Laura Benanti up with a saline IV after these scenes were done. Girlfriend must’ve been dehydrated in the extreme after all those tears.)

After a little nap and a big nightmare, Sadie decides she needs to leave town to get her head right about killing her abusive ex. So she calls Rayna to say goodbye, then does so in person with Luke — who, it turns out, lied to the cops and said he witnessed the shooting, which had been in self-defense, so that the charges would get dropped. Luke and Sadie have a moment (more crying) where they acknowledge that they were moving toward something a little intimate (more crying) but that it’s not going to happen right now (more crying). Meanwhile, I’m hoping that if Nashville is renewed for another season, it brings Benanti back to be the kicky “Gasoline and Matches” chick we first met.

DADDY DAYCARE | While Rayna’s dealing with Highway 65’s biggest liability, Deacon takes Daphne and Maddie to breakfast at a diner. Maddie is angry that he’s sick, but she expresses it via her customary teenager sullen jerkiness, leaving the table before they’re done. “I think we should get the check,” Daphne says, so knowingly that I wonder yet again whether she’s actually a 40-year-old trapped in a little girl’s body. Also, Maddie? NEVER WALK AWAY FROM FRENCH TOAST.

Back at Deacon’s, Maddie holes up in Scarlett’s room and calls Teddy, begging him to come rescue her. Mr. Mayor has to pull himself away from being a morally reprehensible sleaze to do so, but he arrives at Deacon’s and engages in only the smallest of peeing contests with Mad’s biodaddy before learning that Deacon is sick and cutting him a little slack. Later, off of advice from Teddy, Maddie creeps out into the kitchen and confesses that she’s indiscriminately angry about Deacon’s cancer. Deacon sadly says he is, too. (Daphne’s off somewhere, I don’t know, diversifying her 401k or coordinating her purses to her sensible pumps or something. She acts really old, is what I’m saying.) 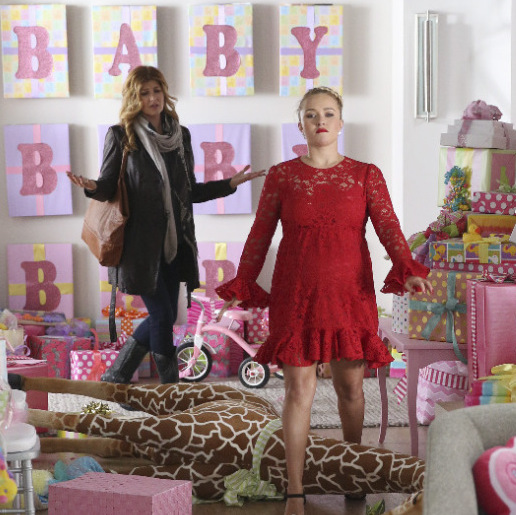 WELCOME TO THE WORLD, BABY GIRL | Though she’s running on fumes, Rayna brings her gift by Juliette’s — where the incredibly hormonal and, let’s be honest, not rational under normal circumstances singer has angrily cancelled the baby shower Ray was supposed to throw for her. (Can’t say I blame her; if the only guests that showed up were on my payroll, I might do the same.) “I am not playing ‘Guess what candy bar melted in the diaper’ with my employees!” Ju rages, tearing down decorations and tossing giant stuffed animals like they’re filled with cotton candy. (I can’t blame her for that one, either. That game is gross, parents-to-be of the world; stop subjecting your baby-shower guests to it.)

When Rayna shows up, Juliette lights into her, saying that she ranks so low on Ms. Jaymes’ list of priorities, she’s beneath “your stupid, perfect hair!” (Ha!) But Ray shuts down Juliette’s tantrum with a screaming fit of her own, which sounds dangerously close to turning into a crying jag — how much can one lady take?! — when Juliette clutches her belly and announces that her water broke. That face Hayden Panettiere makes to close out the scene? PERFECTION.

Rayna gets Ju to the hospital, where she labors and freaks and worries that they baby will arrive before Avery does. “I forgot my Lamaze. This thing doesn’t have a name,” she pants, offering up a litany of things that are going wrong. My favorite: “I’m a horrible, horrible human being.” But of course Avery gets there in time to see his daughter enter the world and to sing a sweetly harmonized song, “Hold You in My Arms,” as he and Ju gaze at the baby. I agree with Glenn: Being a mom looks good on Ju. And just as the new parents are about to choose a name for their kiddo — “What about—” Juliette says — the show cuts to the credits. No fair, Nashville!

PHOTOS Nashville: On the Record 2 Recap: The Gang’s (Almost) All Here

IF I DIDN’T KNOW BETTER | Gunnar spends the entire episode being weird around Scarlett, vacillating between slut-shaming her for spending the night before with Caleb and trying to woo her back via song on stage. When they have it out, all the old business comes to the fore — she’s mad he dated her best friend, he’s mad she turned down his proposal, she’s also mad he never asked her again — but they end the hour in a not-great place. Is there a great clamoring in the Nash-verse for the series to revisit these two as a couple? Because I’m not feeling it (and Hot Doc is hot).

THE MAYOR DARES GO THERE | Teddy, Teddy, Teddy. I feel like you basically signed your own death certificate in this episode when you promised Maddie you wouldn’t get sick and die until you were very old. I doubt you’ll even make it to the end of this season — especially given the way you’re blackmailing city officials into providing the hush money for the hooker who keeps popping up like a whiny, leopard-panty’d Whack-a-Mole whenever you turn around.

Now it’s your turn. What should Juliette and Avery name their daughter? Do you agree with me that Teddy is likely not long for this world? Will you miss Sadie? And had you heard of Ron Pope before, or am I just old? Sound off in the comments!