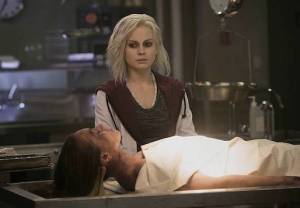 Being a member of the walking dead can take the life right outta you, as iZombie protagonist Liv learns in the premiere of the CW’s new series.

Aside from the whole barely-alive-albino-skin-wanna-eat-brains-24/7 thing, Liv (played by Once Upon a Time‘s Rose McIver) finds out that one of the biggest bummers of zombification is that you just don’t care about much anymore. Not about your burgeoning career as a heart surgeon. Not about your super hot, super understanding ex-fiancé, Major (Robert Buckley, One Tree Hill). Not about your friend and roomie, Peyton (Aly Michalka, Hellcats).

In fact, all you really do is stock up on self-tanner, lay on your couch and have the munchies for gray matter pretty much all the time. To that end, Liv works at the city morgue, where she can surreptitiously nibble on noggins after the medical examiner Ravi (newcomer Rahul Kohli) has done his thing.

Her friends and family think she has PTSD incurred from being part of a strange attack during a party on a boat five months earlier. She voiceovers that she has “PT-ennui,” and that the attack really was an inexplicable zombie outbreak that left her with a deep scratch on her arm and a rather pallid complexion.

Liv soon realizes that eating a cadaver’s brain imbues her with their thoughts and memories; this makes her very interesting to a new police detective Clive (Malcolm Goodwin, Breakout Kings), who wonders how Liv knows so much about a Jane Doe lying on the slab. Ravi comes up with the quick cover that Liv’s a psychic, and Clive grudgingly accepts Liv’s help — which, by the way, is grudgingly offered. 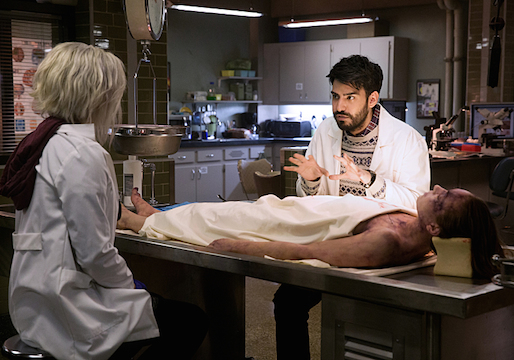 A big part of Liv’s general meh-ness stems from thinking her condition is permanent. But Ravi — a former Centers for Disease Control employee who deduces what’s going on and is intrigued, rather than horrified, by his co-worker’s physical state — thinks there may be a cure. (He also thinks there’s a tie between zombie-ism and designer drug called Utopia, which was present at the boat fiasco, but more on that in future episodes.)

Buoyed by his enthusiasm, Liv applies some lip gloss and goes to visit Major. “What if there is hope, even if it’s dim and somewhere in the nebulous future? It’s a hope I need in order to survive,” she voiceovers… moments before spying him playing (zombie-killing, ouch) videogames with another woman. Still, Liv dusts herself off, puts her big-zombie pants on and decides that though she can’t control what happened to her, she “can choose to help find justice for a fellow dead girl.”

So together, she and Clive solve the murder and collar a bad cop in the process. Her partnership with the detective cemented, Liv returns to the morgue on a high. And with a renewed sense of purpose, Liv shows up to her mother’s charity haunted house — dressed as a zombie, of course — and has a good time with her loved ones.

The series, adapted from the comic book of the same name, comes from Rob Thomas and Diane Ruggiero-Wright, who brought us Veronica Mars. The similarities between that petite powerhouse of a heroine and this one are certainly evident — and that’s not a bad thing at all.

Like Ms. Mars, Liv is quippy, snarky and immediately likable. As the series opens, she’s undergone a very traumatic event that very few people know about. She has a fraught love life. She’s prone to voiceover. And she’s got a black, male partner in crime justice who’s not too bad with the quips, himself. (“Cagney and Pasty.” Heh.)

Bottom line: If you were a fan of the tiny blonde one, you’re likely to enjoy Liv’s undead escapades.

Now we want to hear what you thought about the episode. Grade the premiere via the poll below, then hit the comments to elaborate on your choice!