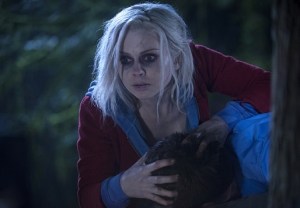 Mmm, we’ve got a brain full of questions about The CW’s new series iZombie (premiering next Tuesday at 9/8c) — like when can we expect the Veronica Mars cast to visit? — so TVLine went to the set to get answers straight from the cast.

From Mars creator Rob Thomas, iZombie follows aspiring surgeon Liv (Once Upon a Time‘s Rose McIver), who becomes a member of the undead after a tragic boat party, forcing her to take a job at the Seattle coroner’s office in order to get her feast on.

But what happens when she chows down on brains? How is the show explaining Liv’s radical, zombified look? And what’s up with David Anders’ (Alias) mysterious character? Get the scoop on those burning Qs and more below. 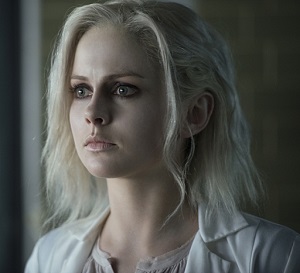 WHAT DO LIV’S LOVED ONES THINK OF HER MAKEOVER? | Liv’s pasty skin and locks – which take an hour and forty minutes in the makeup chair to produce – could understandably raise some eyebrows, but “we play it off as humor rather than investigate that too much,” McIver says.

Liv “has embraced it as her new look,” McIver adds. “She doesn’t try to dye it or hide it.” As for her family and freinds’ reaction to her extreme makeover, they attribute it to a major trauma that’s pulling her away from her old life. “What she’s gone through is so horrific,” explains Robert Buckley (One Tree Hill), who plays Liv’s ex-fiancé Major. “You give someone space, and maybe it’s the way she’s coping.”

WHAT ARE THE EFFECTS OF EATING BRAINS? | When Liv consumes a noggin, she inherits the owner’s memories and skills, including languages and interests. “She also gets flashes of what happened to [the dead], so she’s able to solve this crime, ideally,” McIver explains. “She’ll work out who that person was by the things she suddenly starts doing. [In the pilot], she eats the brain of a kleptomaniac and she suddenly starts stealing things.” 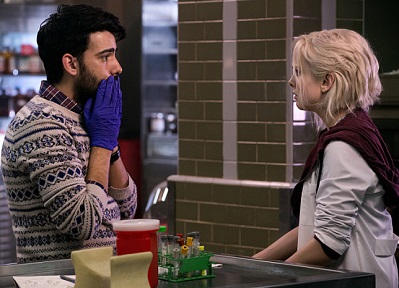 WHO KNOWS LIV’S SECRET? | That honor belongs to Liv’s boss at the corner’s office, Dr. Ravi Chakrabarti. “To him, [Liv is] the most incredible medical spectacle, so there’s this enjoyment of this secret that he has with her,” his portrayer Rahul Kohli describes. As her confidant, “it’s more about treating it and curing it and stopping it from breaking out.”

IS LIV ALL ALONE? | “She knows she potentially contracted zombieism from someone, but she doesn’t really know that there’s a community out there at all,” McIver reveals. “Throughout the first few episodes, you’ll start to get hints of whether there are [other zombies], what they look like, how they manage to hide it.” Which brings us to… 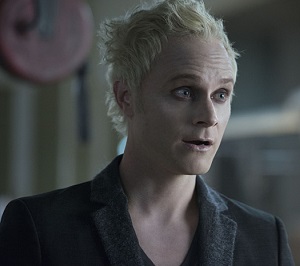 WHO IS BLAINE? | In case you couldn’t tell by David Anders’ own peroxide blonde tresses, his alter ego is also a member of the undead – and a very entertaining, scene-stealing one to boot. “Anders is one of the real highlights of this show,” McIver raves. “He is brilliant, and I think people are going to be pretty blown away by the zombie he’s created.”

HOW CLOSELY DOES THE SHOW HUE TO THE GRAPHIC NOVELS? | “We are a comic book adaptation, but not in the strictest sense,” Kohli admits. “The best way to explain it is we are more Wanted than Watchmen.” Still, McIver points out that her incarnation does share characteristics with the source material’s Liv. “She doesn’t take too much bullsh-t from people,” the actress says. “She’s vulnerable, but she’s not a pushover by any stretch. She’s not your damsel in distress.”

WHAT DO BRAINS TASTE LIKE? | Nothing good, according to this reporter. (See my reaction to a nibble of the concoction.) As for what they’re made out of, “It’s been trial and error,” McIver shares. “We’ve really got it down to something a lot better than it was. It’s agar agar, a coconut kind of gelatin.” Previous variations also included hot sauce or V8 juice, “but that with gelatin is just a combination you’re just never going to love! … What is quite fun is that each episode, Liv spices up how she eats her brains. She doesn’t eat them all the same way. She might blend them or have them in a taco.”

WHEN IS THE VERONICA MARS REUNION? | It could be any day now — considering all the offscreen love between the two casts. (Plus, Mars vets Ryan Hansen, Percy Daggs III and Daran Norris all appear on the CW series.) McIver counts Hansen and Chris Lowell among her close friends and even pow-wowed with the latter after being asked to test for iZombie. “I said, ‘Chris, I love Veronica Mars, but I know you worked with [Rob Thomas]. What do you actually think of these people?’ He was like, ‘That’s so funny because they just called me, asking the exact same thing about you. You guys just go to a room and talk about it because this feels like high school.'” Considering that the actress landed the role, it’s safe to say there’s good mojo all around. “They want to have a good time as much as tell a story that they think is interesting. So I feel like I really landed with my bum in the butter here.”