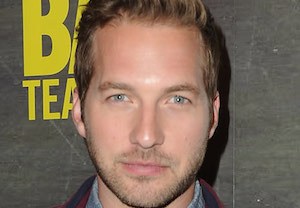 On the heels of their web-series collaboration Play It Again, Dick, Hansen will guest-star on Thomas’ midseason CW drama iZombie, EW.com reports.

In the med student-turned-zombie show, Hansen will appear as a cocky, uncomplicated golden boy and pro snowboarder who is paid handsomely to put his face on things.

Thomas hinted at the casting at TVLine’s Comic-Con video suite, saying there was a role so perfect for the actor — who next stars in NBC’s Bad Judge — it was dubbed “Ryan Hansen” in the writers’ room. (The character’s name is actually Carson McCone.)

* ABC Family will air the fan special Pretty Little Liars: We Love You To DeAth on Tuesday, Oct. 21 at 8/7c. The stars of the addictive drama will answer fan questions and give a behind-the-scenes look at the making of the show, while a “Dearly Departed” segment will feature interviews with Bianca Lawson, Ryan Merriman and Bryce Johnson.

* Showtime’s Ray Donovan on Sunday night closed Season 2 with its highest-rated episode to date, drawing 2 million viewers. Masters of Sex‘s own finale did 890K, up from its Season 2 opener but shy of its freshman finale (1.1 mil).

* Disney and Disney Junior will air Jake and the Never Land Pirates: Battle for the Book! on Sunday, Oct. 26, at 6 pm. Maia Mitchell (The Fosters) will provide the voice of Wendy, per The Hollywood Reporter. She will also perform the new original song, “Once Upon a Time.”

* MTV has given a pilot order to Self Promotion, a dark comedy directed by Zach Braff (Scrubs) and penned by Mark Bianculli, our sister site Deadline reports. The project centers on an overworked assistant whose dragon-lady boss goes missing. Thinking she’ll be the prime suspect, the assistant messes with the crime scene and then starts an investigation to exonerate herself.