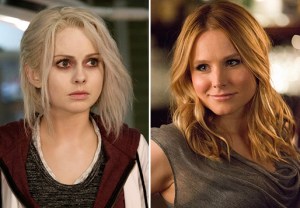 While Kristen Bell’s character didn’t have to follow the rules as a P.I., life is surprisingly more by the books for aspiring surgeon-turned-zombie Liv (Once Upon a Time‘s Rose McIver). After becoming a member of the undead, she takes a job at the Seattle coroner’s office in order to feed. And when she chows down on brains, she inherits the dead owner’s memories and skills; naturally, she pretends to be a psychic and teams with the police department to help solve murders. But that also means obeying the law — ergo, Liv and V likely wouldn’t be BFFs.

Still, iZombie shares some traits with the short-lived UPN/CW drama, particularly its trademark wit and an array of colorful characters like David Anders’ Pretty in Pink-inspired brain dealer, Thomas previews below.

Read on as the EP also reveals Season 1’s big mystery arc and gives us the rules of being a zombie.

TVLINE | This is another series with a blonde pixie who’s very witty. How is Liv different from Veronica?
Her worldview is different. She is more naturally a hopeful person. When I would talk to the Veronica Mars writing staff about how to write Veronica, I would say, “Write her like a porcupine.” She had a lot of awful things [happen to her]. She’s a world-weary, cynical, Raymond Chandler-esque gumshoe [who] sees the glass half-empty — hopefully, charmingly so. For Liv, getting turned into a zombie is the first real punch life has thrown at her. She’s more naturally a sensitive person, a much less aggressive person than Veronica. While [executive producer] Diane Ruggiero and I both find comedy in the same places, so a lot of the sound of the dialogue may feel very familiar from iZombie to Veronica Mars, I never think of Veronica and Liv as being that close in terms of character.

TVLINE | She’s also solving crimes like Veronica. What kind of advice would she give Liv?
[Laughs] That’s interesting, because the upside of being a P.I. is that Veronica never had to follow rules. Whereas working for the Seattle police department, Liv is forced to play by the rules. [With] Veronica Mars, the cool thing was [she’s a] young detective. Because we wanted to play it as noir, we paid a lot of attention to clues, finding the clever way to the clues and the ingenious things she has to do to solve cases. Much less of iZombie is going to turn on that. “Zombie” is the draw for iZombie, and the more we can get into the mythology of zombies — fending off the zombie apocalypse and brain-eating — that’s going to be the goal of this show. Not to mention, Liv can have visions to get us from point A to point B in the case. So for fans of detective work, Veronica Mars is probably the better show. We’re a little bit more genre in iZombie.

TVLINE | With vampires, the rules of differ from Buffy to True Blood to Vampire Diaries. What are the hard-and-fast rules of zombie-ism in this show?
We have a really good idea of what the hard-and-fast rules are, but some of them are uncovered in the show, so I’m a little loathe to give out any of them. Basic rule, the thing that we talked a lot about, is that as long as these people that get scratched keep eating brains, yes, they go pale, their hair goes white, but they’re able to function. They could pass potentially for human. If they stop eating, they will turn into the traditional George Romero zombie. Liv says in the pilot, “If I don’t eat, I get meaner and dumber.” It’s a very slippery slope. In Episode 3, we see what happens to somebody who did not get to eat… The brains affect all zombies until they eat the next brains. And Liv is trying to figure out over the course of the first season, “Is it sexually transmitted? What if I kiss someone? What if I scratch someone?” But for the time being, she has a pretty good idea that she should not have sex with [her ex-fiancé] Major. She’s not willing to risk that.

TVLINE | You said at the TCA panel that you wanted to do a case-of-the-week show, but are you also developing a season-long mystery?
Oh yeah, there’s definitely a bigger mythology. The big macro is,”Prevent zombie apocalypse.” More of the Season 1 big storyline is, “There are teenagers going missing off the streets of Seattle. What is happening to them? And can we put an end to that?” 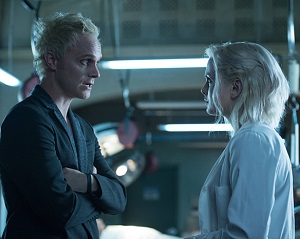 TVLINE | David Anders’ character is a bit different from the others tonally. What kind of guy is he?
He’s [inspired by] the James Spader character from Pretty in Pink. We wanted to go with an upper middle class bad guy, the collar-popped-up version of bad guy, because we thought it would be fun to write that sort of guy. He was a middling- to low-level Utopian dealer, but now that he can turn people into zombies and sell them brains… He might not have been good at being the low man on the totem pole, but he transitions very gracefully into being the brain kingpin of Seattle.

TVLINE | And lastly, have you tried the zombie brains?
I have not. I’m not even a little bit tempted. Rose does not sell them very well.