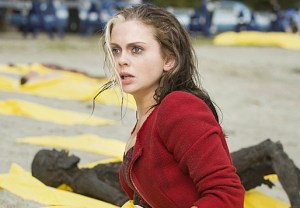 Fair-haired, voiceover-happy, crime-solving heroines notwithstanding, The CW’s iZombie shares not too much DNA with one Veronica Mars.

Appearing Sunday at the Television Critics Association winter press tour, iZombie EP Rob Thomas — aka he who gave us Veronica Mars — detailed the difference in title characters, saying that while Neptune’s plucky sleuth was “hardened” with a “Raymond Chandler-esque, hard-boiled, cynical world view,” iZombie‘s Liv (played by Once Upon a Time‘s Rose McIver)  “is more naturally a softer character” hoping to “return to sweetness and light, things worth living for.”

Living being an ironic choice of word, given that Liv — unlike Veronica — is undead, turned into a zombie during a late-night boat party massacre.

Other topics on tap as iZombie’s cast and EPs held court at TCA:

* Liv’s undead look — everyone around assumes she has suddenly gone Goth — is the result of much hair and make-up experimentation. McIver says one version had her character in a “long blonde wig, wheer i looked like an ’80s rock star.” So why does Liv keep pasty when her undead frenemy Blaine (Alias‘ David Anders) goes in for spray tans? For one, “Liv is out and proud,” Thomas says. But also: “It’s because she will look great on our posters.”

* Thomas acknowledges that he “didn’t hew terribly closer to the source material,” that being the iZombie comic books, which among other things feature a whole “monster universe.” “We only have zombies on the show,” he notes. Meanwhile, making Liv an M.E. toiling in a morgue full of brains (versus the comics’ gravedigger) allows for a Case of the Week format, as “psychic” Liv — who absorbs the memories/skills of those whose brains he consumes — helps a local detective.

* Speaking of Liv’s adopted skill sets, McIver says she’s been “terrified” to see what’s thrown at her next, including, for example, speaking Romanian and wielding kung fu moves: “I get text messages asking, ‘Can you do a cartwheel?'”

* Unlike, say, The Walking Dead, iZombie’s charcters are well aware of zombies and many their pop culture iterations. “If there were a zombie attack, what would you do? I’d watch The Walking Dead,” laughs EP Diane Ruggiero-Wright. (Fun fact: When an iZombie victim doesn’t feed, as Liv does, and thus turns gnarly, the show calls that “a Romero.”)

* The brains eaten on the show are made out of coconut gelatin, which McIver and Anders say tastes fine enough on its own, but not so much when they add other ingredients to make it look bloody, or like Chinese food.

* And yes, iZombie’s undead do have sex — Blaine, in fact, has a lot –– though such pleasure comes with a price. “Zombiism night be sexually transmitted,” Ruggerio-Wright shares. How to solve that problem? In Episode 5, Liv will get a “gentleman caller” who’s also a zombie. As such, Thomas cheers, “Her long national nightmare might end!”