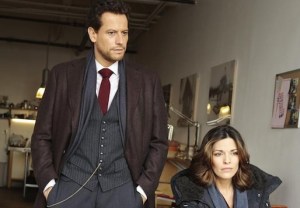 Man, is Forever‘s Henry whipped or what?

What hasn’t changed? Her grip on Henry’s… heart.

Series star Ioan Gruffud tells TVLine that the immortal medical examiner is brought back into Burton’s character’s orbit when one of her students is murdered. That ill-fated young woman had a bordering-on-weird obsession with the 1970s; of course, that means Dr. Eternity flashes back to ’79, when a night on the town causes age-difference friction with his wife, Abigail.

In present-day, however, Molly’s presence may be the romantic jolt that the given-to-brooding Henry needs. (Evidence: He buys a new scarf!)

“Abe tells him at one point, ‘Yes, you’ve had countless affairs with beautiful women all over the world but you’ve never actually gone on a date with a woman you love or have feelings for?’,” Gruffudd says. “It just reiterates the fact that it’s too painful to go there. He does come across as a bit of a cad and a playboy, to a certain extent… It throws up the idea of: Who’s going to be the one to maybe break his heart again?”

TVLine was on set for the filming of tonight’s episode; without giving too much away, we can report that Henry and Molly have a rather avant garde evening together, and he seems pretty high on life in the afterglowmath.

“There’s a sweet-and-salty moment where Jo walks in to see Henry and his sort-of love interest, Iona,” the actress says, referring to Burton’s character by her former name. Det. Martinez stumbles upon “an intimate moment with them and she’s like, ‘Oh, that’s uncomfortable. OK. I think that hurt. I’m uncomfortable.'”

She adds: “It’s like in high school, when you tell your best friend, who’s male, to go out with so-and-so, and he does.” She chuckles. “And then you’re like, ‘Wait… I think I don’t like it.'”