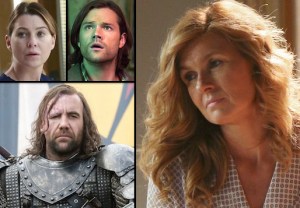 Will Nashville‘s Rayna/Deacon fans be singing a happy tune? Who is Supergirl‘s first Very Big Bad? Which Castle family is expanding? Baby drama for Jane? Read on for answers to those questions plus teases from other shows.

Pretty please, spill some details on whether Nashville‘s Rayna and Deacon will be getting back together anytime soon? –LooLoo
Our resident Nashville native-by-association, Kim Roots, tells me that Wednesday’s midseason premiere “will simultaneously delight and frustrate Deyna fans. The big winners: People who don’t like Luke Wheeler. He has a really rough time after Rayna gives him the heave-ho, and he acts out his anger on a huge scale. Finally, Deacon consults a specialist about his illness, and it’s even worse than we thought.”

Do you have any scoop on the upcoming Supergirl TV Show? –SuperSurfSurf
Kara Danvers née Zor-El will have her work cut out for her from the get-go, seeing as her adversary in the series pilot will be the DC Comics baddie Lumberjack. To that end, the CBS freshman is seeking a hulk akin to “Rory McCann, the 6-foot-6 actor from Game of Thrones” (pictured above) to play this “big, burly monster of a man, who has battled Kara’s cousin” — that’d be you-know-who — “in the past” and shows up to ascertain her level of power, on behalf of an unseen superior.

Isn’t it time for the birth of Palmer’s baby on NCIS? –Ann
Showrunner Gary Glasberg says you “absolutely” should prepare to meet Baby Palmer this season. But first, we gotta have a baby shower, to be held in this Tuesday’s episode… in the big orange room. At the festivities, Glasberg says, “Jimmy Palmer is a classic nervous dad, very conscientious about keeping his mother-to-be Breena healthy, so he’s making everybody a little crazy!”

Anything on ABC’s Forever? –Nicole
And how! The immortal Henry dies via his own hand in an upcoming episode, and “It’ll be a pity for you, if you’re a fan of the show, to know why it happens,” star Ioan Gruffudd says. To protect all of you Foreverists from spoilers, the actor offers only this light tease: “It happens in the past. It’s clever, lovely and sweet. And it sheds really good light on the person that’s with Henry when that happens.”

Can you offer any news on Grey’s Anatomy or Suits? —Jonny
Option No. 2 it is! When asked if there will be any love for Harvey in upcoming episodes, exec producer Aaron Korsh reveals, “There are absolutely romantic allusions in the air… There is some delving into some questions of his romantic future in the last six [episodes]. I think it’s going to be satisfying to some, saddening to others, and not enough for even others.” Hmm, could he be talking about Donna/Harvey ‘shippers with that last description? “I’ll leave it there,” the EP hedges.

Will Grey’s Anatomy‘s Meredith Grey make medical history and make a name for herself? –Marissa
“Hopefully” is the best prognosis I could extract from series creator Shonda Rhimes when I brought her your question. As she notes, “It’s a struggle to get where she’s going when you’ve been living in the shadow of your mother, and you’ve also been living in the shadow of Cristina and Derek.” Without either of those pillars in her orbit these days, “It is a struggle to push yourself to become something that you’re not 100-percent sure that you can be.”

I absolutely love Ruzek and Burgess on Chicago PD. How is their relationship looking in future episodes? –Staci
Remember, this is TV, so it could all change in a few weeks. But for now, the couple is “good,” executive producer Matt Olmstead says. “We always do these kind of relay races with romances in terms of we’re addressing one [story thread] and then it’s time to pick the other one back up again.” Where Ruzek and Burgess go from here is up in the air, with five more episodes to break before the end of the season. “We’re certainly in the room trying to figure out the best [approach], playing them as a real couple.”

Those new Jane the Virgin photos have me on edge. Is there medical drama ahead for Jane’s baby? –Dee
Gina Rodriguez confirms, “There is going to be an episode where Jane has some complications with the pregnancy.” That twist will also reveal the baby’s gender, but the star says, “We focus more on the complication than ‘boy versus girl.'” On a lighter note, Jaime Camil says that in Episode 13, “Something very funky happens to Rafael” – though we’re not sure Rogelio’s portrayer isn’t biased. “I’m Team Michael, definitely,” he admits. “I cannot tell you why.”

On NCIS: New Orleans, will we see Pride’s father before the end of the season? Who would be a good fit to play him? –Chris
In the time since you sent this email, Pride’s father was cast, with the venerable Stacy Keach (Prison Break), who makes his debut on the freshman drama’s Fat Tuesday episode airing… well, on Fat Tuesday, Feb. 17. “Pride’s dad is in jail, and he’s been there for a while, and that will work into an arc that continues through the season,” says show boss Gary Glasberg. “We’re excited about what Mr. Keach brought to the show. It’s a fun part, so we’re sort of letting him take it and run with it.”

Any spoilers about Castle‘s Ryan-centric episode? Will we see the toddler and Jenny? –Fred
This much I know: In Episode 18, you will meet Ryan’s sister Gwen, as well as her husband Frank, who happens to be a burly security specialist.

Any new love interests on the horizon for Castle‘s Esposito now that he and Lanie have called it quits? –Teri
“Quits” is a funny word, because to hear Tamala Jones tell it, “Oh, it’s still going on. I grabbed his butt at the end of the [break-up] scene, and you don’t do that if it’s over over. We are still messing around, but we are not getting married.”

With the series finale of Two and Half Men just around the corner, and everyone concerned about whether Charlie Sheen will make an appearance, do you know if we’ll see other old characters make appearances as well? –Jon
“There’s going to be an awful lot of folks on the finale,” series creator Chuck Lorre promises, touting a veritable “cast of thousands.” As for prodigal son Sheen, Lorre coyly says, “We’re going to have a finale that you’ll be very, very pleased with. And that’s all I’m going to say.”

Can you give us anything on Supernatural‘s Sam? —Maria
“We probably will not see flashbacks” from the Winchesters’ time apart, executive producer Jeremy Carver admits. But there’s still a big Sammy story brewing. “What starts as a desire to help Dean [sends] Sam on very much his own journey by season’s end. But the starting off point is most definitely, ‘How am I going to help my brother?'”

Will Supernatural‘s Word of God tablet storyline be revisited this season? –Tom
When we delivered your Q to showrunner Jeremy Carver, he had an intriguingly cryptic reply: “There are a couple tablets out there… I can’t say right now. Good question.”

I need some info on The Flash. Somehow I haven’t clicked yet with Iris and Barry. Can we hope for a Caitlin/Barry romance?! –French
You may be in luck. Not only does the next episode feature Grant Gustin showing off his musical chops, but “Barry and Caitlin go on an inadvertent date, which is one of my favorite scenes of the whole year,” showrunner Andrew Kreisberg raves. “They’re hilarious together.” As for Iris, Barry’s heartfelt confession of love is “definitely weighing on her,” the EP affirms, “and it’s going to weigh on Eddie and Caitlin and Linda a little bit.”

Anything new on The Mentalist? We are dying here! –Lia
Interesting your use of the word “dying,” because as forewarned in the promos, this Wednesday’s episode is indeed a sad one, and Jane’s speech at the very end may wreck longtime fans more than a bit.

Real questions, real answers. If you need the Inside Line on a favorite show, email InsideLine@tvline.com!  (With reporting by Vlada Gelman and Kimberly Roots)