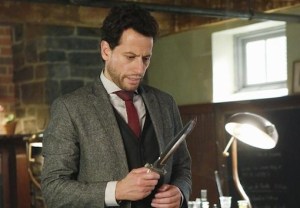 The following contains spoilers from the Forever fall finale.

The ABC drama on Tuesday revealed the identity of the mysterious man who refers to himself as “Adam,” claims to be immortal like Henry and has been phoning Dr. Morgan since the pilot: He’s Lewis Farber, a therapist played by Burn Gorman (Revenge, Game of Thrones), and he ups the game in a big way by the end of the episode.

When a mental patient shows up at the antiques shop and claims to be the caller — who has murdered others during the hour — Henry takes it upon himself to kill him. But afterwards, it becomes clear that the troubled man was coerced into pretending to be the caller by the actual caller: Gorman’s Farber (though we doubt that’s his real name), who pulls up outside the store in the episode’s final moments, vows that he’s not done with Henry and then drives away.

TVLine chatted with star Ioan Gruffudd about what the revelation means for Henry’s (endless) future, when we’ll next see Gorman’s unkillable baddie and what Gruffudd thinks will happen if Jo and Henry ever get together.

TVLINE | When I saw Gorman in the episode, I immediately thought, “Oh, he’s Adam.” He always plays villains! But then his character seemed so benign, I thought perhaps his casting was a big red herring.
I was worried about that. Because you and I know — because we’re so savvy about and aware of people who get cast in things. Because I knew of him, of course, and I thought, “Oh, he always plays these [characters].” But I’m thrilled that you of all people saw him and thought, “Oh, he’s actually quite nice.” [Laughs]

TVLINE | Does Adam appear again in what you’ve shot so far?
No.

TVLINE | Will he pop up in future episodes?
Burn is on another show [AMC’s Turn], and there’s always talk of getting a date to come back. [We’re filming] the second episode after the big reveal and he has been mentioned, but he hasn’t been seen.

TVLINE | Adam has been around a lot longer than Henry. Does Henry worry at all that he might turn into someone like Adam, given enough time?
Well, the way that we’ve played it after the fact that he’s mortified about [killing the wrong man]. Although there was a line that was never really discussed with the writers, because — I say, “I didn’t have to do it.” I don’t know why I said that line. Was that a red herring. or was that me saying “I could have run away” or “I could have let him take me”?… [Henry] says that line to Jo in the next episode afterwards, and I wondered what that meant… It would be incredible to see Henry have to kill somebody in order to protect his secret. That would be the ultimate challenge.

TVLINE | We see Henry in the 1800s in this episode. Are there any historical periods you’d like to see via flashback?
We did a brief thing in the ’60s. Something of course from the days I grew up, something like early ’70s, that would be amazing. All the other stuff is all delicious and delightful, and the costumes are so wonderful. Something that all the audience members could all relate to. You know, early ’80s or something like that, that would be fun.

TVLINE | How much of Henry’s back story have you been privy to?
The stuff that is coming up, I’ve been forewarned about. Most of the stuff is fantastic. There’s never a point where I’ve gone “Oh, where is this heading?”  [Henry’s] just got so much scope, and the writers are so clever. 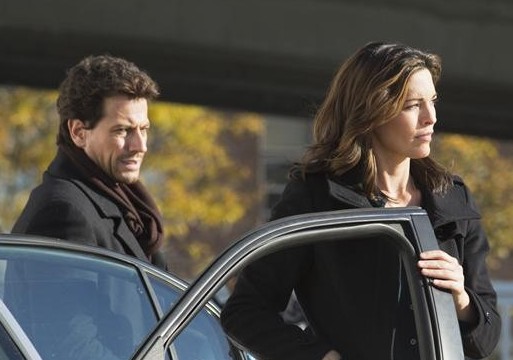 TVLINE | The show does a good job of making Henry and Jo’s relationship warm and friendly without veering into will they-won’t they, at least not yet. Have you and Alana de la Garza discussed how you play that?
It’s interesting. I think it’s all down to the fact that we both know who we are as characters, where we’ve been, and where we need to go to further live a fulfilling life. Henry doesn’t die, but for her, she needs sort of closure from her past and she’s in a bit of a denial I think, from her loss. But as far as Alana and I discussing that, the scripts are so good and so subtle that we just play the episode. There’s no real effort involved or there on the page and it’s rather beautiful. There hasn’t been anything that’s come along yet that I’ve gone “Oh, this is too fast, this is too sudden.”

It’s all, as you said, very natural, and very warm — and very loving without any real romance there at all. I think that’s what people are attracted to. You can imagine them being together or maybe want them to be together, but it’s such a subtle thing that we have and it’s rather beautiful. It’s almost as if we ever did get together, the show might be over. [Laughs] It would be a totally different show by that stage.