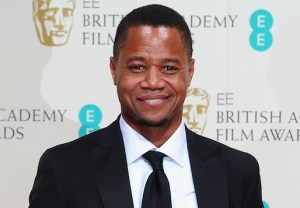 Forever‘s grieving Det. Martinez is about to get a lot less lonely: Cuba Gooding Jr. has been cast on the ABC drama as a love interest for Alana de la Garza’s widowed character, EW.com reports.

The Oscar winner will play Isaac Douglas, a rich do-gooder who — after being cleared as a possible murder suspect — wines and dines the lovely crimefighter over a multi-episode arc.

“You will see more of [Jo’s] love life, for sure” in coming episodes, de la Garza told TVLine during a recent visit to the series’ Brooklyn set. “You’ll see her go on dates and maybe have a love interest for a little while.”

The new storyline will allow viewers to see the tough cop “in a little bit of a different light,” the actress says. “I mean, she goes on a date and she might dress up a little bit, which is fun.”

Gooding will first appear on the series in late March. He recently was cast as O.J. Simpson in FX’s upcoming American Crime Story: The People Vs. O.J. Simpson.