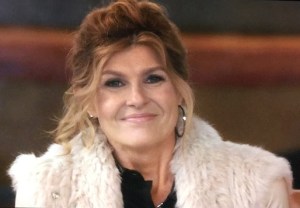 Ever think that Taylor Swift looks at Nashville‘s Maddie Conrad and thinks, “You lucky twerp?”

After all, while a pre-teen Tay-Tay had to hoof it all over Music City, begging label execs to listen to her demo, Rayna’s older daughter spends most of this week’s episode being pursued by an aggressive studio head with a penchant for expensive welcome gifts.

Don’t worry, Taylor: By the end of the episode, Rayna puts the kibosh on her kid’s career (for now) and inadvertently brings about the downfall of her biggest enemy — and, might I add, she does it in some impressively high heels.

Meanwhile, Sadie’s ex is still a threatening jerk, Deacon is still dying (sniff!) and Juliette is still immobilized by the impending arrival of the Averyspawn. Read on for the details from “I’m Lost Between Right and Wrong.”

DIAMONDS AREN’T A GIRL’S BEST FRIEND | Rayna has just finished dispatching Bucky to check in on Avery’s first studio session with Sadie when a box arrives: It’s a diamond necklace for Maddie, welcoming her to the Edgehill family. (Side note: Does Jeff’s handwriting look like a fifth-grade girl’s, or is it just me?)

Over in his office at the record label, Jeff is playing indoor golf, using “winning” like he’s 2011 Charlie Sheen, berating his assistant and basically being the biggest asshat that ever lived. Rayna marches in and is shocked when she sees Teddy’s signature on the contract Jeff proudly produces.

There are meetings, there are lawyers, there’s Rayna threatening to strip Teddy of his parental rights “seeing as how Deacon is Maddie’s biological father.” Paternity burn! Finally, Teddy admits that the Smirky Turtle is blackmailing him with his nights with Ol’ Leopard Panties-for-Hire, and I think what I adore most about this scene is that Rayna doesn’t seem surprised in the slightest that her ex has been paying for sex. Teddy Conrad: The Constant Disappointment. (I think that may have been his campaign slogan.)

LIKE A BOSS | So Big Red puts her no-eff-you pumps on and commandeers a Board of Directors meeting at Edgehill, outing Jeff’s involvement in Layla’s overdose and getting Maddie’s contract voided in the process. (Side note: Can’t wait until the always rational Ms. Conrad finds out that she had — and lost — her ticket to the big time.) But Rayna’s not done: She wants sole custody of the girls. “Get yourself some help,” she sniffs, just before kicking her former life partner out of her office.

In the Edgehill waiting area, Layla — whom Jeff invited to play for some VIPs — finds out the hard way that her appointment has been cancelled. So she’s understandably peeved when the Turtle shows up at her door later on. “Your meeting was cancelled because I got fired,” he blurts, indicating that he wants to come in. And she lets him. And I just don’t know how to feel about this development.

RAY OF LIGHT | When Hot Doc won’t give Deacon an answer re: how much time he has left, Deke does an Internet search and learns he’ll probably be dead in six months. Oh DEACON, go far enough down the WebMD rabbit hole and anyone can get that answer. Deke writes a will, fights with an overly positive Scarlett and tries to hide his condition from Maddie. Good luck with that one, dude, especially because you can’t stop crying in front of her and it’s starting to weird her out. But by the end of the hour, father and daughter have resumed their guitar lessons, Deacon has found a renewed hope, and those of us in the Save the Scruffy One Society can breathe a tiny sigh of relief.

Meanwhile, Hot Doc wants to talk to Scarlett in private and oh my goodness all of you people in the comments last week were right he’s going to tell her she’s adopted because her blood type doesn’t match her mom’s and… oh wait, nope. He’s just flirting with her. And, when she brings him a proper latte so he doesn’t have to endure the hospital’s terrible coffee, she’s totally flirting back.

RELATED Nashville‘s Laura Benanti on How Sadie Will Overcome the ‘Shock, Fear and Shame’ of Domestic Abuse

AVERY IN HIS ELEMENT | The Pregnant Island Formerly Known as Juliette moves for no man. So she bids Avery do everything for her (my favorite visual of the night was poor little Hayden Panettiere using her bump as a shelf for a fountain soda), which makes him late for his first recording session with Sadie.

Avery proves himself a master producer when he meticulously examines every aspect of the process, costing the label money but resulting in an awesome sound. And when Sadie’s ex, Pete, violates her restraining order and then has her served with papers — he’s suing for half of basically everything — Avery also stands in as psychologist and bodyguard. Full service! 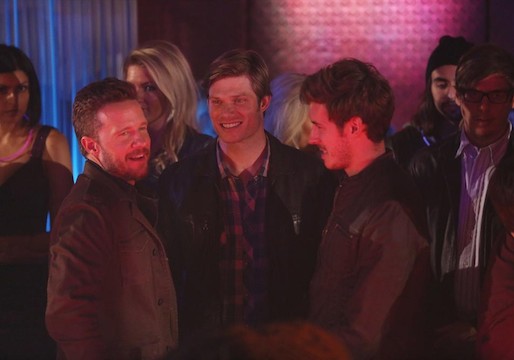 BROS BEFORE… | Now, I don’t want to suggest that Gunnar is slow, but he’s just now getting around to feeling bad that Kiley cheated on him with his brother. And Luke, who shows up to write a song with him, thinks that a boys’ night out will make them both feel better about being jilted. So they grab Will and hit a bar, scoring hook-ups and hangovers for Luke and Gunnar and a freakout for Will (following a blonde putting his paw up her skirt). The next morning, Luke realizes that he’s just as “sensitive” as Will is (heh) and together they write a power ballad called “Can’t Help My Heart.”