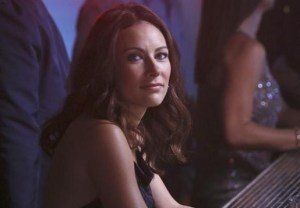 Good news: Laura Benanti, who plays the newest Highway 65 artist, says her character will refuse to be anyone’s punching bag… though it may take her a few episodes to get there.

“She was in an abusive relationship as a younger person, and had the courage to leave that relationship and have a really meaningful life and success,” Benanti tells TVLine in advance of the series’ winter premiere (Wednesday at 10/9c). “So she has to figure out a way to reclaim her identity now that this person has reared his fist.”

Read on as Benanti talks Sadie’s trajectory over the next few episodes, including when we’ll next hear her sing and whether that scene between her and Will Chase’s Luke meant what you all thought it did.

TVLINE | Showrunner Dee Johnson said that Sadie’s ex will be around for a little while, because he wants what he thinks is due him. I really hope that means we won’t have to see you get beat up on a regular basis.
No. I’m not going to get hit. It’s a one-time punch and then it’s just dealing with the aftermath of that.

TVLINE | Will he take legal action regarding her song?
Yes.

TVLINE | How does she handle the aftermath of getting hit?
The shame, fear and shock, and the being thrust back into a life she had left, at first that takes over. She, like many would, retreats and feels the embarrassment and the shame that can often accompany a horrifying act like that. And then she slowly starts to come back to life and realizes that she has to handle this properly.

TVLINE | Is Rayna involved in any of this?
Yes, but not for a while. As I was shooting this storyline, before it aired, I had a woman pick me up from the airport in Nashville who’s a driver, and we started chatting. She opened up to me about her life, and one of the things she said to me was that she was in an abusive marriage, and she didn’t think to leave him until he started abusing her children. I thought, “This is so interesting, that at this point in time this woman is opening up to me in such an interesting way.”

TVLINE | And she had no idea about your storyline.
No. She had no idea. So I took it as… the universe was like, “This is a story that some people need to see.” This woman said to me she didn’t tell her mom, she didn’t tell her friends, because she was so embarrassed. Because she considered herself a strong, intelligent woman, and even she couldn’t figure out why she was letting this man treat her this way. And it’s the answer that everyone gives. “He’s not always like that, sometimes he’s wonderful, he had a horrible childhood, he didn’t mean to, he was in a bad mood, I shouldn’t have said that.” There’s a lot of shame that accompanies it. Sadie doesn’t end up going to Rayna for quite some time.

TVLINE | What can we expect to hear from Sadie in coming episodes, musically?
There’s that song “Novocaine” that you guys heard, that comes back a little bit, and then there’s a new song that I actually really love that’s coming up that you see me writing and then you see me record it in the studio with my band, which I think is really cool.

TVLINE | Ballad? Up-tempo?
Ballad. Normally we pre-record, so you’re playing and singing along to a pre-recorded version of yourself. But when I’m writing the song [on the show], I actually played and sang it live. You’ll get to hear an unobstructed guitar-playing and singing.

TVLINE | Did you have to practice a lot?
Oh yeah. My fingers bled. It’s like Whiplash over here. It’s bloody fingers and ice buckets, Kim. That’s all it is.

TVLINE | We got so many tweets and such about the CMAs scene where Sadie and Luke were at the bar together.
I know. I know!

TVLINE | You saw that reaction from fans, too?
I did. I feel like everyone just wants Luke and Rayna to be done with each other. So anytime he even remotely looks at a garden gnome, they’re like, “He’s gonna get with that garden gnome!” They just want him gone out of her life. They want Deyna: Rayna and Deacon. That’s the whole thing. And of course that’s what we want. Hello, we’re not monsters. Everybody wants them to be together. So I think there’s that, and also I think people, just because it’s Nashville, inherently didn’t trust me or trust Sadie. “What’s her game? What’s she gonna do to Rayna? How’s she gonna hurt her?” I think people were looking for the drama, because there wasn’t really any at first. There was just fun car chases and hanging out, [the shooting of which was] my favorite day of my life. I do have more scenes with Will Chase coming up, whether or not they are romantic remains to be seen.