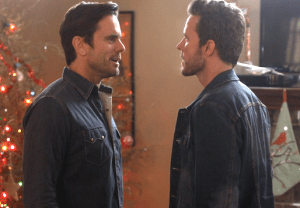 Deyna fans — that is, those who want Nashville‘s Deacon and Rayna to get over it already and get together — came one step closer to their goal with Wednesday’s packed midseason premiere.

Among other developments, the hour saw the aftermath of the death of Rayna and Luke’s romance, which came to a definitive end when she called off their wedding in the previous episode.

“I may have overreacted a little,” star Will Chase jokes, in character, about Luke’s response — driving a pickup through the wedding cake, turning the reception into a screw-you concert — to getting jilted.

RELATED Nashville‘s Laura Benanti on How Sadie Will Overcome the ‘Shame, Fear and Shock’ of Domestic Abuse

Meanwhile, Deacon’s joy when Rayna indicated she’d like to pursue something romantic with him was tempered by his (still secret) diagnosis of a very tough to treat terminal illness.

Star Charles Esten says that the pessimist in his character never expected anything different. “There’s a certain part of Deacon that says, ‘What part of my life will make you think this is going to turn out well?,'” he says wryly.

In separate interviews, TVLine chatted with Esten and Chase to get their take on the First Lady of Country Music’s decision. Read on for Chase’s defense of his heartbroken character, Esten’s estimation of Deyna’s romantic future and both of their takes on that front-yard brawl.

TVLINE | How far ahead of time did you know that Rayna and Luke weren’t going to last?
CHASE | I mean, [the show] didn’t pitch it [when they were pitching the character]. I think we all kind of knew, just because it would be too clean and neat… I probably knew in Episode 7 or 8, but I certainly didn’t know at the beginning.
ESTEN | We don’t know as far in advance of anything really as people think we do, obviously. We get a script a couple of days or a week before we start, that’s when we find out what’s really happening… I love that moment where [Deacon finds] out… I love that the writers had Deacon find out that she called the wedding off by the mere fact that Luke is over there looking for her. [Laughs] Deacon gets that moment of, “Oh my God.” I would have been more surprised — or Deacon would have been, I should say — if the wedding had gone through. This is good news for Deacon for sure.

TVLINE | Will, your role is kind of a thankless one, given the reaction of some Rayna-and-Deacon fans.
CHASE | People are very passionate about that, as am I. You want Deacon and Rayna together, our two heroes of the show, our two troubled flawed artists… I like Luke a lot… He may have overreacted, but I think he’s justified. Rayna’s pretty much taken him a little bit for a ride. I like how they wrote the episode, because I do a full arc from going completely ballistic, running through a cake, to a lovely song at the end that actually means that he really is hurting.

TVLINE | I was impressed by how much Luke was able to get done in that day.
CHASE | Well, the magic of TV. You see the magic of being a billionaire country star. He did get a lot done, didn’t he?

RELATED Marcia Gay-Harden on Going Toe-to-Toe With How to Get Away With Murder‘s Fearsome Annalise: ‘Oh, Hell No — They Don’t Get Along!’

TVLINE | Deacon must feel like the cosmos is trying to mess with him, given the timing of Rayna’s declaration to him and his diagnosis.
ESTEN | The first thing [he thinks] is just that flat out, “I dare to dream for a little bit, and I dare to think I can finally find my place in sun, so of course this is what happens.” I think that’s in everybody, that little bit of weakness.

TVLINE | How much interaction do Rayna and Luke have in the back half of the season?
CHASE | We have some interaction, and it’s good interaction. I like where they’re taking both of us.

TVLINE | I assume Rayna and Deacon spend more time together in the episodes ahead?
ESTEN | I think I can say that! [Laughs] Yeah, absolutely, but in different ways… We get to be around each other a little more because I’m not on tour and she’s not with Luke. It’s tenuous steps back to each other. If it’s ever going to happen, we both want it to happen right, and we both want it to happen for the right reasons.

TVLINE | Talk to me about the fight in Deacon’s front yard.
CHASE | Oh, man. It was a lot of fun, but it hurts… Me and Chip rolled around a lot… We had people in the neighborhood come by and watch Luke and Deacon roll around on the ground.
ESTEN | First of all, just like Eric Close when Teddy and I used to go at it, it helps when you get along real good with the guy — and I do. In a sense, it lets you go at it harder! [Laughs] We sort of go, “Let’s do this the best we can…” [Will and I] both went at it not wanting to hurt one another, but you don’t want to see people putting the breaks on, ’cause you know that’s been waiting for awhile. He’s had that coming ever since he punched Deacon up behind the Bluebird.