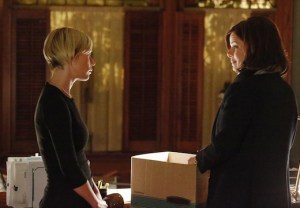 Marcia Gay Harden says she initially viewed How to Get Away With Murder‘s twisted universe like a chess board with rules she hadn’t yet learned.

“I was asking for those long conversations with the writers about [my character’s backstory], and they would say, ‘Well, we’re not sure. Let’s see where it develops,'” says the Oscar-winning actress, whose character Hannah Keating makes her second appearance on Thursday’s episode (10/9c on ABC). “I guess that’s what happens in the show — things really [come to life] in the writers’ room and can change based on what the actors bring to it.”

Harden says with a hearty laugh that beyond knowing Hannah was the sister of Sam Keating — the missing husband of defense attorney Annalise (Viola Davis) and lover/presumed killer of co-ed Lila Stangard — “I wasn’t even sure where I came from, what I was doing there, or how to play at this game of chess that I was a key player in. But it was really interesting to try to figure it out.”

Ultimately, Harden settled on one guiding principle: “Contrast, contrast, contrast — counterpoint and contrast with Annalise. My character is so very different [from her] — and there were going to be secrets my character knew, ones that could help her go in and search for the truth.”

TVLine caught up with Harden to find out just how disruptive her character will be to Annalise and the “Keating 5” — and whether Hannah might wind up getting swayed by her hard-charging sister-in-law. Plus, check out a sneak-peek video the two powerhouse characters facing off below!

TVLINE | Your character entered the picture at the end of last Thursday’s episode — dropping this bombshell on police detectives investigating her brother Sam’s disappearance (and the idea that he’d killed Lila): “Let me be clear — whatever his wife told you, my brother is no murderer.” And in that one line, it was pretty clear Hannah would be butting heads with Annalise. What’s it like to shake up a series midway through the season? And how has the experience been in terms of going up against this powerful but enigmatic woman Viola Davis has helped create?
Well, Annalise is a commanding general of a little army; you know that going in. And when they say, “You’re going to go toe-to-toe with her,” you wonder, “What is your artillery? What is your rank and what is your uniform?” And all of those questions are answered in a roundabout way.

There is no one who can go toe-to-toe with a general like Annalise using the same artillery. And my thought when I first read this was — well, it could be a clash of the titans, but in this case, it wasn’t going to be. This is Sam’s sister, and she’s going to go about finding what she needs in a less direct way. That was exciting to me. It’s not quite Columbo-esque — that’s not really what they wrote — but what is my information that I have that’s different? How do I go about understanding Annalise? I know the history of her, I know her weak spots, I know her emotional life — which is something a lot of people don’t quite know. It was challenging in a great way — but not daunting.

TVLINE | [Laughs] I meant more in terms of the Hannah we’ll get to know in this Thursday’s episode — can she be taken at face value?
I feel like she’s fairly what she is — she values honesty and directness with a much higher regard. Annalise is very much able to be cagey and keep secrets. I don’t really feel like Hannah is a person who can keep secrets in that same way. She’s more of a truth seeker. 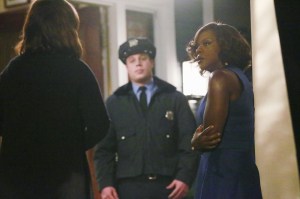 TVLINE | Prior to Sam’s “disappearance,” were Hannah and Annalise friendly sisters-in-law or…
Oh, hell no — they don’t get along! Hell no! That was a given. When Viola and I met we were like, “But we love each other! What do you mean we don’t get along? Do we have to not get along?” [Laughs] But the whole point is there’s this family history and competition. These things were important for the writers to explore — so there’s pre-imposed dysfunction between the two ladies that will play to certain discovery scenes. And my character comes in sensing, “Something’s rotten in the state of Denmark,” and [trying] to illuminate what could be rotten. She’s not a student. She’s not afraid of Annalise. She’s someone who speaks her mind.

TVLINE | In the previews for this week’s episode, we see Annalise sitting Hannah down and saying that Sam is not the man they thought he was. Is any part of Hannah buying this?
Initially, it’s just such a bizarre thing. Remembering back playing the scene — it’s very hard to begin to buy that. “If he was to be accused of murdering this girl, why?” My thought is when you’re dealing with something so far outside your realm of behavior, it’s hard to go there. If you’re Annalise, she’s solving crimes, her class is called “How to Get Away With Murder,” so murder is not outside the realm of what people do with their day! But for Hannah, it is as bizarre as it would be for you and me: “Your brother is a murderer.” That’s how I think the scene plays out if I’m remembering it: “You’re telling me this, and I’m hearing you, but I can’t fathom what that looks like.”

TVLINE | What does Hannah do for a living?
She’s a psychologist. I don’t know that we ever hear that [on screen], but I know it.

TVLINE | There are some preview pics that ABC has released showing Hannah with that sneaky-quiet lurker Bonnie. Do they have a past together?
Well, being a psychologist, Hannah has this ability — one of the few things I did know about her — to assess behavior and know where weak links and soft spots and Achilles’ heels are. So, she could zone in on Bonnie and know that might be an in for some knowledge.

TVLINE | We also saw in the previews Hannah coming across the Keating 5 with a little eyebrow raise. Does she get interesting moments with the students, or is Annalise going to thwart those connections?
The answer is both! She gets some interesting scenes, and yes, Annalise tries to limit her access. [Laughs]

Excited about Harden and Davis interacting on screen? Any theories on what Hannah might uncover? Sound off in the comments!