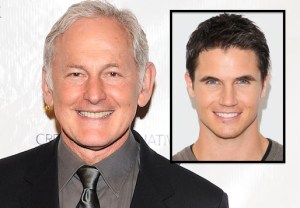 TV’s erstwhile Spy Daddy is now spying a quite interesting mission on The Flash.

TVLine has learned that Alias alum Victor Garber has been cast on The CW’s brand-new superhero hit in the recurring role of Dr. Martin Stein — aka one half of the heroic entity known as Firestorm.

In the DC Comics character’s TV iteration, Stein is a brilliant but arrogant nuclear physicist who has sacrificed everything, including a marriage, for his work in transmutation. After he discovers that S.T.A.R. Labs’ malfunctioning particle accelerator has fused him with the younger, more impulsive Ronnie Raymond (played by The Tomorrow People‘s Robbie Amell), the doc races to find a way to separate them before it’s too late.

Of note, Garber’s previous TV credits also include Eli Stone, which was created by Greg Berlanti and counted Andrew Kreisberg as a producer — both of whom now are EPs on The Flash.

The Flash this week debuted to 4.8 million total viewers and a 1.9 demo rating, making it The CW’s most watched and highest rated series launch in five years.

Garber, who also is due back as Sleepy Hollow‘s Papa Crane this season, will make his debut on The Flash in Episode 12.