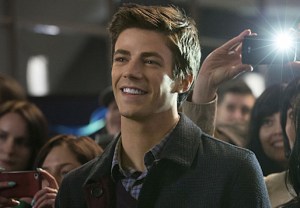 Barry Allen is no Flash in the pan.

The CW’s new superhero series on Tuesday night debuted to 4.8 million total viewers and a 1.9 demo rating (per finals), marking the network’s most watched and highest rated series launch since The Vampire Diaries in 2009 (4.9 mil/2.1).

The Flash‘s quick start — which TVLine readers gave an average grade of “A-“ — was up hugely from The Originals‘ year-ago premiere in the Tuesday lead-off spot (2 mil/0.9), and it even bested sire Arrow‘s own launch numbers (4.1 mil/1.3).

All told, it stands as The CW’s second-most watched series premiere ever (now lapping 90210) and third-highest rated in the demo.

With some Flash overrun now subtracted out, Supernatural (average grade: “B+”) was adjusted down to 2.5 million viewers and a 1.1 rating, on par with its finale and down a tenth from its previous premiere.