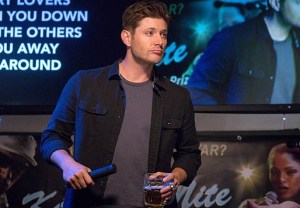 Supernatural‘s Season 10 premiere on Tuesday night opened with Pat Benatar’s “Heartbreaker” (during the “Road So Far” montage), but perhaps it also should have been Dean’s karaoke tune (instead of “I’m Too Sexy”)? It’s not that the bravado and new hairstyle aren’t a little bit of a turn-on, but darned it if the elder Winchester didn’t break our hearts with some of his callous demon behavior.

The episode starts with Sam torturing a demon to find out Crowley and Dean’s whereabouts, even going so far as to slice her throat to call someone who has answers. “Whatever soul you had, whatever Boy Scout code you cuddled up to at night, it’s all gone,” she replies. Four weeks later, he’s no closer to locating his brother, but he’s still searching despite Dean’s note, which reads: “Sammy let me go.” (Did anyone else find the fact that demon Dean still calls him “Sammy” comforting?) Sam reaches out to Cas when he stumbles upon a lead, but the angel’s fading grace has left him in no condition to help, and Sam has the hurt shoulder from their last trip to prove it.

“I miss him,” Cas declares. “Why would he just disappear?” Then he wonders if the Dean they knew is possibly still out there.

The answer: Sort of. There’s still a playfulness to Dean as he partakes in some karaoke, not caring that everyone’s booing him. And he’s still into the ladies, casually hooking up with a waitress. But the way he pretty much dismisses her afterwards is different. Not to mention, he goes to town on her abusive (ex-?)boyfriend, beating him to a pulp. He also kills several of Abaddon’s groupies with the First Blade, but as Sam discovers, they were actually sent by Crowley, who’s trying to keep Dean sharp for their professional future.

When Sam finally calls, Crowley gets his digs in. “Your brother and I were starting to wonder if you hit another dog,” he says. Burn! Sam vows to save Dean or die trying, but Crowley counters that it’s not what Dean’s become that bothers him. “You can’t stand the fact that he’s mine,” he continues. “Dean Winchester completes me.” (Their earlier “Jerk”/”Bitch” exchange, a trademark of the brothers, rubs salt in the wound.)

He certainly completes Crowley’s plans. All the karaoke and drinking and sex is fun, but Crowley’s got a bigger picture in mind where the two of them “create the perfect Hell.”

“We’re not ending the party,” he tells Dean. “We’re just moving the party.” He leaves his new buddy to consider his proposal. 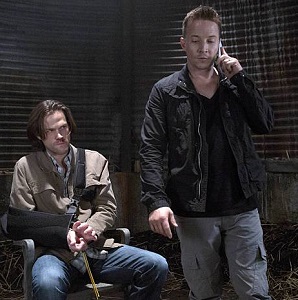 Meanwhile, another hunter named Cole is after Dean, unaware of what’s happened to him, and kidnaps Sam in the process. Something went down between Cole and Dean a long time ago, and “now he’s prey, and I’m the monster,” Cole declares before calling up Dean to demand a trade. But he’s not about to come to Sam’s aid to save his life, instead vowing to find and kill Cole somewhere down the road.

When the hunter threatens to slit Sam’s throat, Dean coldly replies, “I told him to let me go, so any jam he’s in now, that is his problem… He knows damn sure that if I am one thing, I am a man of my word.” Eek.

Now back to Cas for a second. Hannah visits him, seeking help with two rogue angels, Daniel and Adina, who killed one of their own for attempting to bring them home. They track down Daniel, who’s enjoying his freedom and having choices and doesn’t want to return to Heaven. Hannah threatens to get physical, but Cas calms her down. As the trio talk, Adina shows up and a fight breaks out, during which Cas kills Daniel to save Hannah as Adina escapes. While Hannah is all about rules to keep chaos from breaking out, Cas wonders if he’s been on Earth too long. “There’s seemingly nothing but chaos,” he says. “Not all bad comes from it – art, hope, love, dreams.” Hannah’s befuddled response: “But those are human things.”

Supernatural fans, what did you think of Dean’s new attitude? How concerned are you about Cas’ nasty cough? (He’s totally going to become human, right?) Hit the comments with your thoughts and grade the episode via the poll below!