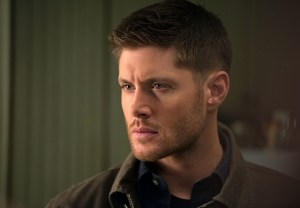 The Supernatural hunter-turned-evil thing will party up it when the CW series returns this fall (on Tuesday, Oct. 7), so much so that even the King of Hell won’t be able to handle Dean’s new demonic playboy ways, star Jensen Ackles tells TVLine.

With Dean embracing his new life like an addict looking for the ultimate high, the actor reveals that his onscreen alter ego will go out of his way to make sure his brother Sam doesn’t lead him back back to a simple, human existence.

Below, Ackles also discusses directing himself, singing on the show and keeping his performance fresh after nine seasons of being Dean.

TVLINE | Going into Season 10, what surprised you about Dean’s journey in the upcoming episodes?
Well, we have a slightly different version of Dean. A little bit of time has passed [at the start of Season 10], and he is a demon version of himself, out running amok with Crowley. It’s interesting because, over the past nine years, Dean has always been kind of a constant. Sam has really been the one that’s been possessed or [had] the demon blood or [been] soulless. There’s been a lot of different variations on the character of Sam, but Dean’s always been the steady, the constant. So to have that now change, and Dean is now an alternate version of himself, is exciting. It’s challenging, and it adds a unique element to the beginning of the season that we haven’t seen before.

TVLINE | What was the most challenging aspect of trying to incorporate a demon into Dean while still keeping him Dean?
Just that. [Laughs] Exactly what you said. That was the challenging aspect. It’s not like a demon that overtook Dean’s meat suit. This is the same guy with a twisted soul. So I wanted to keep Dean alive in there, but I had to make an exaggerated version of him, and that was challenging. This is a character that I’ve played for nine years. To tailor that into something different, it’s hard not to fall back into your same routine. TVLINE | Did this storyline make you feel like you were going to the new season reinvigorated?
Oh, I was super excited when I read the season finale last season. “Oh, sweet! We haven’t done this before.” I was excited to see where we were going to pick up, where he was going to go, how bad he was going to be. It’s fun because he ends up being too much for Crowley to handle, so to speak.

TVLINE | What qualities does being a demon bring out in Dean? Does it magnify any of the aspects of him that we’ve seen already?
Oh, it’s like an ultra version of a womanizing party animal. He’s out partying in Vegas with the King of Hell, he’s got backstage passes and he doesn’t give a sh-t about anything. That’s essentially what we’re going to see.

TVLINE | What effect does that have on his relationship with Sam?
Sam can’t find him because he doesn’t want to be found. Because [Dean is] having fun and he knows that if Sam finds him, he’s going to do his best to reverse the demon in him. But he’s like, “I’ve got the golden ticket.” This might be a little heavy, but it made me think about heroin addicts. To them, they found the magic key. They found the recipe to happiness. People are like, “You can’t do this. This is going to ruin your life,” and they’re like, “Screw you! This makes me feel amazing. I’m going to do this. You’re the one that’s an idiot. This is the best stuff ever.” And… everyone else is watching this steady decline of this person. That’s kind of demon Dean.

TVLINE | So it’s safe to say that when Dean wakes up and realizes what he is, he embraces it? Or is it more, off the bat, he’s a little bit conflicted and then eventually he starts to enjoy it?
Oh, no, he embraces it very quickly. There’s no inner struggle. Because he’s not just a demon, he’s a demon with the Mark of Cain, which makes him like über demon. So there’s so much evil inside him, there’s so much devil inside him, that the practical Dean is smothered.

TVLINE | You have a big episode coming up, the 200th. [Executive producer] Jeremy [Carver] said some music is involved. Are you going to sing in the episode?
I have not read the 200th episode. I read [Episodes] 1, 2 and 3 because 3 was the one I was directing, and that was enough for my brain to process.

TVLINE | We know you can sing. Would you be up for singing on the show?
Yeah, but Dean can’t sing. [Laughs]

TVLINE | I guess, but it’s meta. So it could be Jensen singing. It could be like the sixth season episode “The French Mistake.”
It could be. This is true. It could be. You never know with this show.

TVLINE | Tell me a little bit about the episode you’re directing. Did they throw anything new at you?
Yeah, demon Dean. I had to introduce a new character. We shot this episode first so that I could prep without having to work on another episode. It’ll air third, but it’s the first time that I had to play demon Dean. So that was a bit of a curveball, trying to direct and introduce a new character, a new version of Dean that we’ve never seen before. That was a big challenge to grapple with.