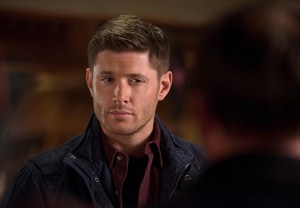 It’s not the end of the world, but things are still pretty dire when Supernatural returns Tuesday (The CW, 9/8c).

With Dean now a demon, and Sam on a quest to find and save him through whatever means necessary, Season 10 features a sometimes dark, “much more personal road,” executive producer Jeremy Carver reveals. To that end, many of the characters — not just the Winchesters — will ask themselves, “Am I my own worst enemy?”

Below, the EP previews the season’s “slower build,” the state of Dean and Sam’s brotherly bond and Cas’ own search for his friend.

TVLINE | In the trailer, it looks like Jensen Ackles is having such a ball playing demon Dean. What’s it been like for you in the writers’ room, taking this really well-established character and showing off a different side of him?
It’s been a lot of fun. It’s actually more careful than it seems… Some of the darker things that demon Dean does [are] fun to write but a little bit wince-inducing, because demon Dean is certainly darker than regular Dean… There’s always this worry of, “Oh, my goodness, is Dean really doing this?” But of course, it’s demon Dean. It’s liberating in one sense, and a little bit nerve-inducing in the other.

TVLINE | You also have Sam doing some dark stuff, including torturing a demon for answers. How dark is Sam going to go to save Dean – or to find him, should I say?
It’s actually a little bit of both. He goes even darker than [that scene].

TVLINE | Dean and Sam are both doing questionable things. Are they their own Big Bad this season?
That’s an excellent question. It’s certainly a big part of the beginning of the season. In many ways, not just Sam and Dean, but some of our other bigger characters as well, are all having to come to terms with their badness, as it were – or frankly, their lack of. All of our major characters this year are taking very personal journeys [about] what they need to really come to terms with, who they are, and that’s going to force certain decisions to be made that maybe they don’t want to make or certain moves or certain bad things that they have do, or frankly, good things. The question, “Am I my own worst enemy?” is certainly a possible theme you could put to the season. You just cracked it! TVLINE | In terms of the arc of the season, is there also an external, new enemy that they have to face? Or will all of their problems stem from themselves?
It’s a little bit of both. I will say that this season does not have the end-of-the-world mythology that we’ve had in seasons past, in terms of the Big Bad who’s going to destroy the Earth or whatever. It’s a much more personal road everyone is going on. As a result, it’s a bit of a slower build. I’m not saying it’s an uninteresting build; it’s actually really interesting. We’ll be introducing, over the course of the season, characters that are very, very, very personal to our main characters, and that’s all going to start to snowball into, “You are who you are,” and having to deal with all this and drawing some lines. Of course, there’ll be Bigger Bads that emerge, but the central focus of the season is really on these personal arcs.

TVLINE | Are those new characters monsters and demons or human characters?
A little of everything.

TVLINE | What will Dean and Sam’s personal journey as brothers be like? Things are downright violent between them in the trailer.
Right. What do you do when you discover your brother has become a demon? The first decision Sam makes, which we’ve already teased, is, “I’m going to save him from this.” That leads Sam to do questionable things, which leads each brother to question who the bigger monster is. And then what do you do once you get your brother back? What is the aftereffect of such an experience? That pretty much sends them into the rest of the season: How do we deal with this now? It’s a topsy-turvy road that the brothers are on in terms of, what do you do in the wake of having become something pretty awful? We’ve dealt with that before in very different ways. I think we’re dealing with it in different ways this year.

TVLINE | Both you and Jensen have talked about how it’s still Dean in there, just with a twisted soul. When Dean says and does the things that he does as a demon, how does that affect Sam, emotionally and mentally? Does he take it personally?
There’s no question he does. It’s a question of what he chooses to do with that. What do you do when your brother or family member is clearly not in their right mind and they say things? And of course, the things that are more true hurt the most. How you choose to react to it, that’s the question. That is a question we have Sam asking himself. TVLINE | What about Cas’ reaction to Dean’s new state? Are we going to get to see him interacting with demon Dean?
Yes, we will. Sam and Cas are both on the search for Dean when the season opens. They’re doing it in very different ways, for reasons that are explained in the opener. Cas has a very heavy investment in Dean’s welfare, as always.

TVLINE | Is there still a strong bond between Dean and Castiel? Or is it tested?
The bond is strong between Cas and Dean.