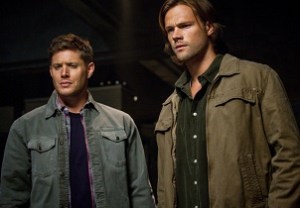 Supernatural will be welcoming back some familiar faces for its 10th season (premiering Oct. 7), and TVLine has the scoop on the returning law enforcement officers — as well as a surprise guest.

Not only will Sheriff Mills (played by Kim Rhodes) make another appearance, but “we’ll see one character that we introduced last year in ‘The Purge,’ Sheriff Donna Hanscum [played by Brianna Buckmaster], who I think is a lot of fun [and a] wonderful actor,” executive producer Jeremy Carver tells TVLine.

Meanwhile, the CW series’ “musical-ish” 200th episode will feature “just about every character — I’ll say they will be represented — that you’ve ever loved or hated on the show, and I say that very obliquely on purpose,” Carver teases. “So they will be there in spirit.”

The EP also says “we’ll see one other character that we introduced a couple seasons ago who I don’t want to spoil just yet.”

Given that star Jared Padalecki told Zap2It that the milestone hour brings the Winchesters to “a place where they’re doing a play based on the Chuck Shurley books,” could the mystery guest star be Rob Benedict, aka Chuck the Prophet, aka (maybe) God?

Supernatural fans, hit the comments with your theories! And let us know which other characters you’d like to see return.