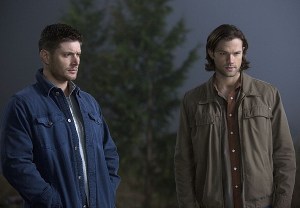 Dean Winchester is getting sinister.

Supernatural star Jensen Ackles introduced a teaser from the upcoming season’s third episode, which he directed, at the show’s San Diego Comic-Con panel on Sunday, and it was chilling.

The clip featured Dean confronting Sam for the first time since he was turned into a demon.

“Guys like me, we’re the natural order,” Dean declares before telling Sam that he knows what he really is and what he did while looking for him. So who is the real monster, he asks. Demon Dean then attacks his bro with an axe, who puts a knife to Dean’s throat.

Clearly, the the elder Winchester’s new way of life will “have an enormous effect on the season and on the brothers,” executive producer Jeremy Carver previewed. “These boys really dig into, Sam in particular, how to rescue his brother from being a demon.”

Meanwhile, Dean will “struggle with what it means to be a demon. It’s very, very exciting. We’re really excited most of all with the idea of these brothers questioning who the real monster is. It’s exciting and very moving and emotional.”

The new plot twist is also a welcome change for the actors. Ackles noted that on set last Tuesday, Demon Dean killed a guy; on Wednesday he beat a guy; and on Thursday he beat one guy and killed another, which was “awesome” because he got to get all his frustrations out.

Co-star Jared Padalecki, who’s gotten to play many incarnations of Sam, added: “It’s a real joy to get to see Ackles flex those muscles.”

And who was easier to direct: Dean or Demon Dean? “In this particular episode, Demon Dean, because he was tied up most of the time,” Ackles replied to hoots and hollers.

BREAK OUT A TUNE | You may have heard the 200th episode is “musical-ish,” as Carver calls it, but Ackles also hinted that the season opener will feature Demon Dean doing karaoke.

ANGELIC WOES | Although Castiel’s grace is fading and he’s getting weaker, he’s still putting others first. “Castiel is concerned about trying to help Dean get patched up again more so than he is about getting his own powers back,” Misha Collins shared.

DEMONS AND DRIVERS | As Ackles previously told TVLine, Demon Dean will be a lot for Crowley to handle. “[We’ll] see whether Crowley has any control,” Mark Sheppard teased. Added Ackles: “At some point, Crowley’s going to be like, ‘This is a bad, bad idea.’” But let’s talk about the real relationship you want to know about: Demon Dean has the Impala, but doesn’t care about it as much as regular Dean, Ackles revealed.