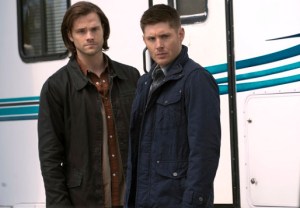 Supernatural: 10 (plus) seasons and a movie?

Stars Jensen Ackles and Jared Padalecki and executive producer Jeremy Carver did not seem ready to hang up their demon-hunting hats on Friday at the Television Critics Assoc. summer press tour in Beverly Hills.

“There’s so much story left to tell,” Carver said, giving props to the cast and crew. “It remains the hardest-working bunch I’ve ever had the pleasure of working with. There’s no quit in anybody.”

For his part, Padalecki is on board to stick with the show as long as the quality remains up to par, and he has no doubt that it will under Carver’s direction, he noted.

“I truly do deeply care about this show and about Sam Winchester,” Padalecki said. “I don’t want him to be broken down, beaten down into something I don’t respect. And I respect this show. … We know the show enough and our characters, if there’s an end coming, we’ll all see it and won’t have to push it. When it’s time to hang up the Sam Winchester hat, I’ll welcome that chapter.”

Added Ackles: “I think we’re all on the same page. We still get excited about it. That hasn’t tarnished in 10 years.” In fact, after the reading the Season 9 cliffhanger, he “got all giddy about it. As long as there’s that fulfillment, that excitement, then we’ll keep going.”

So what does the upcoming season have in store to keep the actors giddy? There will be some new characters — demons, angels, ghosts, werewolves — and of course, “a side of Dean we’ve never seen,” Carver teased.

“We’ll be staying with Demon Dean for more than one episode,” the EP revealed. And it’ll be a “different type of Demon Dean then you might expect.”

Elsewhere, “while Sam is on the hunt for his brother, there is another mysterious character who is on the same hunt” and causes complications for the brothers, continued Carver. On the heavenly front, “Castiel is very much in the picture at the beginning of Season 10,” although he’s “in danger of dying” due to his fading grace.

As for how Supernatural might one day wrap, Carver admitted it’s tricky because “I know that [creator] Eric Kripke always had an ending in mind.”

“I have an image…but I always want to keep room for happy accidents as well,” he added. “The show is continuing on beyond any of our wildest dreams, so I don’t think I want to limit ourselves. … All the writers, we have images in our heads, but our minds are wide open.”