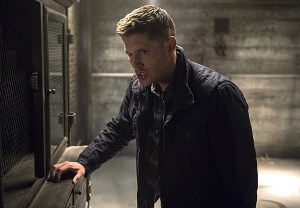 The Winchesters are going down some very dark roads.

When The CW’s Supernatural returns this fall (on Tuesday, Oct. 7), Dean will be a demon — and not a very nice one, executive producer Jeremy Carver tells TVLine.

The newly minted fiend will also be MIA, leading Sam on his own unsavory journey as he attempts to find his missing brother.

So just how bad will things get? Let’s just say viewers may be left wondering, “Which one of these guys is the true monster?” the EP reveals.

TVLINE | You’ve had instances where the boys were possessed, but now Dean’s fully a demon. What made you decided now was the time to pull the trigger and go down that avenue?
Dean being a demon here ties into a deeper mythology in the show, that being the Mark of Cain and Cain. That’s really one of the places we started to get the idea. The show has made a point of saying how rooted these brothers are in, frankly, the mythology of the world, and to find another anchor that was literally around at the beginning of time made us feel like… It wasn’t so much the spectacular effect or whatever of Dean being a demon. It’s more just rooting him in something more final, something that will not necessarily totally go away even when/if he’s converted back from demonism.

TVLINE | Dean as a demon, how is that different from Dean just being possessed by a demon temporarily? What is he like?
Dean is not possessed by anything. It’s his own soul that’s been twisted into a demon soul, so this demon is not anyone other than Dean. So every thought, every action, that’s Dean, as opposed to some other demon possessing him. So while he’s a demon, that causes some complication of thought in him in that, “This is really me doing it.” It also motivates a certain bravado. “Yeah, this is me doing and owning it!” There’s a real period for Dean of deciding how dark he’s going to be and what kind of demon he’s going to be, because he can’t blame it on anyone else but himself. And then afterwards is when it will have the most effect on him because it was him. It was his actions that led him to becoming a demon. He pushed it with the Mark. He pushed Sammy away at the end of last season. He said, “I can do this by myself.” So there’s a certain consequence to all this that is almost more interesting to us than the actual demon part.

TVLINE | Does it intensify some of his bad qualities? He’s not a bad person, but he has qualities like all of us that we’re not proud of.
Yes. I don’t think demon Dean is the nicest fellow around the block. And that’s by design. He’s not intended to be a particularly nice guy and that’s one of the things he struggles with. He knows how he’s acting. Sometimes, he’ll fight against that in odd ways. That’s the real conflict that’s within him right now when he’s a demon. Because it is him. He’s not unaware of what he’s doing. And although his soul is twisted, he is not without a certain amount of self-examination. TVLINE | What does that mean for his relationship with Sam?
Their relationship very much ended on an up note last year. So as a sort of answer to the beginning of Season 8, when Sam actively didn’t look for his brother, Sam this year is really looking for his brother but doesn’t have any idea of what happened to him when the season starts. Sam is so invested in finding his brother that it leads him to do some questionable things that will make him and, certainly, the audience wonder which one of these guys is the true monster.

TVLINE | Mark Sheppard is now a series regular, so how does Crowley fit into the picture and what is his role in Dean’s new life?
That’s very much a topic of where we start the show. Crowley, as we see at the end of Season 9, is very excited about the idea of essentially howling at the moon with his new buddy Dean. We’ll see in Episode 1 that Crowley has slightly different designs to get that and will be proposing a business relationship, which Dean may or may not accept. That’s the subject of the first run of episodes — what is their relationship going to be? TVLINE | And what can you say about Castiel’s story? Is he still in Heaven trying to manage things?
No. When we pick up Castiel, he will be on Earth. He will be alone for reasons that are explained, but not alone for too long, and he will be very much in a similar place where we last saw him in that he still has the stolen grace, still fading. He’s still in danger of death. The moral question for Castiel is, “How do I stay alive? How do I not be a burden on others [like] Sam, who’s got his own problems? How do I get grace to live without taking another angel’s grace?” So he’s in a bit of a quandary.