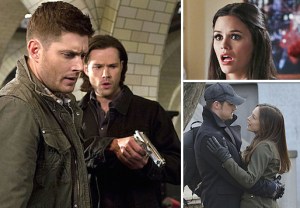 Crossovers, cancellations and spoilers were on the menu during Friday’s Television Critics Association panel with CW President Mark Pedowitz.

First topic of discussion was Beauty and the Beast — specifically, why the low-rated series was renewed for a third season. Pedowitz attributed that to its “very engaged fan based” and “very international following. In short, “We brought it back because … it’s a very profitible show for everybody.”

He noted that producers weren’t certain of its renewal when writing the Season 2 finale, crediting Brad Kern for crafting “a terrific ending, whether it was a season or series finale ending.”

As for where Season 3 could go from here: “[Vincent and Catherine] are out in the public, they’re a couple and they have to find a life together,” Pedowitz said. “[Vincent] is a medical doctor on the show, and you know what, he will get his license back.” There will also be a bit of a time jump between the finale and the premiere.

Other highlights of the CW executive panel…

* “The Supernatural spin-off that came in, creatively, did not quite get where we wanted it to go,” Pedowitz said when asked why Bloodlines wasn’t picked up. “We have told Jeremy [Carver] and Eric [Kripke] and Bob [Singer] that we’re very open to do another spin-off. We’re waiting for them to come in with whatever the new concept is. I would love to get another Supernatural spin-off [on the network].”

* Pedowitz  also discussed the upcoming Supernatural special with TVLine after the panel: “It’s a treat to the fans who’ve supported the show for the prior nine years. It’s taking you back all through the nine years. It’s giving you some commentary from the cast and the creators, Eric Kripke, and the executive producers. It’s fun. It tells you what happened over the past nine years.”

* Pedowitz emphatically denied that Hart of Dixie‘s Friday placement signals its impending end: “We’re doing 10 episodes this year, and we’re looking forward to seeing what happens.” (After the panel, he told TVLine, “[executive producer] Leila Gerstein is planning to have a pregnancy eventually happen to the character of Zoe Hart.”

* When asked whether or not Pedowitz took Star-Crossed fans’ complaints into consideration before canceling the alien drama, he said, “I did receive 90 boxes of pasta this week. We appreciate the fans and everything they do … but there just weren’t enough of them to keep the show going forward. We appreciate their passion for the show.”

* New drama Jane the Virgin came to The CW because “it has a title that catches your attention.” Pedowitz previously worked with executive producer Ben Silverman when he did Ugly Betty on ABC and wanted to recreate that on The CW. As for pairing Jane with The Originals on Monday, Pedowitz said that even though the shows aren’t thematically the same, The Originals was a “self-starter” last season.” He hopes its large female audience will also love Jane.

* “We brought [The Carrie Diaries] back for a second season, not necessarily because of its ratings, but because of its digital presence,” Pedowitz said of the now-cancelled Sex and the City prequel. “But you need both aspects, otherwise you can’t sustain a show. … I was proud of the show. Again, an incredibly engaged fan base. But after a while, it just wasn’t economically feasible.”

* As for The Tomorrow People, “the show just did not generate the audience we hoped to generate [on-air or digitally.]”