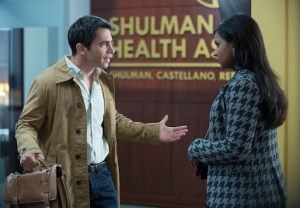 This week in Mindy and Danny’s Varied and Experimental Sex Life — excuse me, The Mindy Project — nearly the entire half hour is devoted to Danny’s “accidental” breaching of a very sensitive perimeter.

In their relationship. In bed.

No PG way to say it, so if anything other than the missionary position offends you, bail out now… Danny comes knocking at Mindy’s back door, if you catch my drift. But is Dr. L down with this new development? Read on for a recap of “I Slipped.”

BACK IT UP | The morning after the incident, Mindy and Danny are discussing their sex life — of course — in public. Dr. C maintains his innocence, swearing the whole thing is a misunderstanding. “You weren’t where I was. You didn’t see how it all went down,” he says, prompting her to reply, “Danny, this is not Benghazi!”

But Peter, Mindy’s self-described “most perverted friend,” convinces her that “No man in the history of time has ever ‘slipped'” — Danny’s defense — “and not been lying.” Confronted, Castellano feigns bad eyesight, an excuse nullified by an emergency trip to the ophthalmologist.

Finally, he just confesses that he did it on purpose, mainly because he was pretty sure she’d done it before. (She hasn’t.) “I will not be slut-shamed in an ophthalmologist’s office!” she declares, backing out of the room so her boyfriend won’t be unnecessarily tempted.

IT’S PATRIOTIC, REALLY | But after stress-eating some raw cookie dough, Mindy softens and attends Peter’s Banging in Bed Booty Camp, complete with instruction in positions like the necktie, the ascot and the bagpipe. She’s so freaked out, she decides to just acquiesce to Danny’s rear request. So she drops some Morgan-prescribed sedatives — oh yeah, he’s a nurse practitioner now — into a glass of Scotch to numb herself for the experience.

Instead of making her mellow, the combination basically rufies her, landing her in the hospital and making Danny momentarily the subject of police questioning. She finally confesses that she’s worried Danny thinks she’s too boring, because he’s so worldly and experienced. And he confesses that his slippage was just him exploring something new, and that he hasn’t done it before, either. “I just tried something, because America was built on trying things,” he says proudly.

They agree not to start freaky stuff without the other’s consent, and all is well… until Mindy nearly bites Danny’s tongue off during some whipped cream play and light bondage. Easy there, Min!

BROS BEFORE… | Elsewhere, Morgan Parent Trap­s Peter and Jeremy into having dinner together, with the hope that they’ll repair their friendship in the wake of the Lauren debacle. But Peter’s eyebrows accidentally get singed off his face thanks to a rogue drink-tossing accident, and the best the two men can do by the end of the episode is to promise to be civil to each other. Wonder how this will play with the “#TeamPeter” crowd at the office…

I’m of two minds on this episode. The writing is quite sharp and the central conceit is funny. But the idea that Mindy has to drug herself to try something sexual she really doesn’t want to do seems icky to me. Agree? Disagree?  Sound off in the comments.