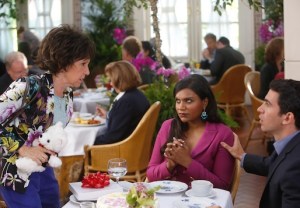 We at TVLine have seen tonight’s Mindy Project (Fox, 9:30/8:30c), in which Rhea Perlman debuts as Danny’s hard-to-please mom, Annette Castellano. Perlman herself hasn’t, though not for lack of trying.

“I’m so technologically impaired,” the Cheers vet says, laughing. “They sent [the episode] to me this weekend, and I couldn’t open it. And I tried everything! So there you go. But I know what I did, so I know it was a good episode!”

RELATED Fall TV Spectacular: Exclusive Scoop and Photos on 42 of Your Returning Favorites, Including The Mindy Project

She’s not wrong. The installment begins with Mindy gunning to win Ma’s approval, but her plan (naturally) devolves. Before the end of the half hour, the two women have traded barbs, made Danny extremely uncomfortable and — without giving too much away — flailed around on the floor.

We chatted with the Emmy Award-winning actress — who’ll be back for more episodes later this season — about what Mama Castellano’s cooking up for Danny and Mindy.

TVLINE | Even though Annette Castellano doesn’t show up on screen until this episode, she’s been a presence in the show for a while. What attracted you to the part?
The writing. This is funny stuff. Their character development, it’s not straightforward. You don’t know which direction it’s going to go in. It’s very appealing. I’m going to do a few episodes this year, and already, I’m finding out stuff about this character that I would never have dreamed of. It’s not just some mom who’s sitting there, cooking dinner. I think Mindy’s got kind of a genius thing going on. [Laughs] She really is so smart.

Also, I’ve gotta say, it seems like something I haven’t done: a cool show. [Laughs] When I was doing Cheers, that was a cool show. But since then, I don’t think I’ve done a show where people in college watch it. I did Kirstie last year, which I loved. I was so sad when it wasn’t picked up, and I loved working with all of those guys. But it’s a different animal than this.

TVLINE | There’s a bit of physical comedy in the episode. Did you know about that beforehand?
No. I had no idea! [Laughs] They had only sent me a mock-up of [one scene]. I had no idea where it was going to go… I laughed so hard. [Kaling and I] both laughed so hard every time.

TVLINE | Did you improv a lot? Or did you stick to what’s on the page?
I’m good at sticking to what’s on the page. [Laughs] In that episode, there’s not a lot of improv. I’m doing one now where there’s a lot more improv going on. It’s really a technique I have to learn. Those people are so good at it, because they’re actors and writers.

TVLINE | In the episode, we see a picture of you and Chris Messina sporting some egregious holiday wear.
Right!

TVLINE | Was that Photoshopped, or did the show actually take that picture?
They took that picture. We put on those sweaters. We didn’t take too many, but me and him and Max Minghella [who plays Danny’s younger brother, Richie] — I love that relationship, that I just coddle the baby boy and I’m so hard on Danny. And it’s so different, because as the parent of three kids, my whole life has been about trying to make it even.