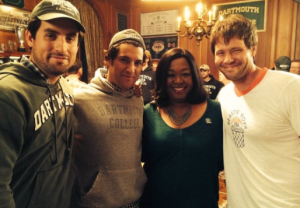 Shonda Rhimes has a hidden talent, and The Mindy Project is about to blow the lid off of it.

As TVLine was first to report, the empress of Shondaland will make her acting debut this fall when she guest stars as herself in an episode of the Fox comedy — and we can now reveal what draws her into the show’s orbit.

RELATED Fall TV Spoiler Spectacular: Exclusive Scoop and Photos on 42 of Your Returning Favorites, Including The Mindy Project

Based on the above photo tweeted by Mindy writer-actor Ike Barinholtz, many of the show’s male characters have apparently been aware of Rhimes’ secret hobby. (Our guess: A beer pong tournament will be held during Dartmouth Reunion Week.)

Fun fact: Mindy Kaling and Rhimes are both Dartmouth alumni.

Mindy is back for Season 3 this Tuesday at 9:30/8:30c. (Additional reporting by Vlada Gelman)