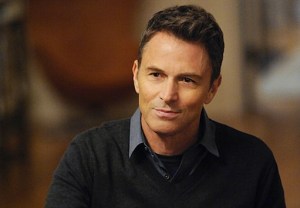 If Madam Secretary‘s Henry McCord can be cool with his wife holding some of the greatest power in the free world, portrayer Tim Daly says, regular dudes need to fall into line.

“Here’s a guy who’s got his own thing going, and he’s completely supportive and unintimidated by his wife being in a position of power,” Daly tells TVLine. “I think the fact that he’s unintimidated by a woman in power is a great message for men: Guys, it’s OK. Your girlfriend or your wife can be big, and you can still be confident. You don’t have to worry.”

The supportive, sexy relationship between the McCords is a treat of the new fall season; Daly’s character is a religion professor, a great dad and the biggest fan of his Secretary of State wife (played by Téa Leoni). Even when they argue, like they do in this Sunday’s episode (CBS, 8:30/7:30c), “They fight really fair,” Daly notes.

Still, the Private Practice alum says, Henry, Elizabeth and the kids will face plenty of challenges as the season progresses. Read on for all the scoop — including whether he’ll cook up anything with Mindy Lahiri in the near future.

TVLINE | It’s nice to see that Henry seems wholeheartedly supportive of Elizabeth — at least as far as we’ve seen.
The thing that will hopefully make this show stand out from some of the other political dramas that are out there is that at the center of it is a relationship that really is working. It’s a really great relationship — but not a whitewashed relationship. These people are in this passionate, dedicated marriage, but they’re not without problems. They’re not without challenges. They get into it.

The thing I love about this episode is, they fight, but they fight really fair. They’re both coming at it from their own point of view, they’re on the subject, they’re not throwing in the kitchen sink. That’s what makes the people in this show relatable.

TVLINE | Henry appears to be the ideal husband.
This is the thing: It’s very easy to say that Madam Secretary is a show that’s a good role model for young women. Here’s this woman in a position of power, operating at this high level, blah blah blah. That’s fine, and it’s true. But I think the interesting heart of the story, really, is what a great role model Henry is for men.

TVLINE | When things are going too well for a TV couple, I tend to worry — it’s got to end sometime. Is there anything to worry about coming up?
There’s a lot to worry about, because [the McCords] have a lot of challenges. They both have important lives, and we will discover a lot about Henry that we don’t know in the first several episodes. The things we have to worry about are not cliché things. They’re not the things that we all expect to happen. TVLINE | How much of the Elizabeth-Henry relationship was in the script vs. how much you and Téa have worked out on your own?
A lot of it just sort of happened. It’s funny. I feel kind of guilty telling this story now, but we both went to this tiny little high school in Vermont, a boarding school. It’s a unique experience, to say the least. We knew coming [into the show] that we were gonna get a certain kind of person… We’re there to work, to have a good time and to tell the story as best we can. So there’s that, and part of it is just stuff that you can’t predict. We get along really well. People have said we have good chemistry. I’m just glad that translated onto the screen.

TVLINE | Last season, you were on The Mindy Project —
[starts speaking in a Staten Island accent] — Charlie Lang! I love Charlie. “Sauce” — the greatest line I’ve ever had. Just one word. “Sauce.”

TVLINE | When I interviewed [Mindy Project EP] Matt Warburton earlier this year, he said that was his favorite line of the entire season.
“Sauce!” I would love to go back and reprise that role, but I don’t know. I’m on the wrong network, I think. [Laughs] If you can work that out for me with CBS, that’d be great.