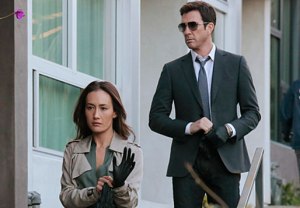 I hope you weren’t planning on sleeping well tonight, TVLine readers. After watching Stalker, I don’t see how you can.

The CBS procedural drama, which debuted Wednesday at 10/9c, was as paranoia-inducing as its title would suggest — but will you pursue the series in the weeks to come?

The drama focuses on the LAPD’s Threat Assessment Unit, led by Lieutenant Beth Davis (Nikita‘s Maggie Q). The unit handles all stalking cases that make waves in the city, and in this debut hour alone, the team has got its hands full.

Fortunately — or unfortunately, depending on how you look at it — the unit gets help from Detective Jack Larsen (Hostages‘ Dylan McDermott), a recent transfer from New York City’s homicide department. From the start, he and Beth are at odds, which could be chalked up to any number of reasons. His tactless remark about meeting Scarlett Johansson? His cocky attitude? Larsen attributes Beth’s “vibe” to the few seconds his gaze lingered on her chest, but even when he admits to staring, Beth is having none of his apologies. (This will be fun!)

Still, the tense dynamic doesn’t prevent the detectives from doing their jobs. In one corner, there’s a case centered around two young women whose attacker douses them with gasoline before attempting to light them up (and tragically succeeding, in one instance). In the other, there’s college student Eric Bates (Daren Kagasoff, The Secret Life of the American Teenager), whose creepy former roommate won’t leave him alone.

After a series of way, way disturbing revelations — two stalkers filming and caressing a young woman while she sleeps at night? Bye-bye, sweet dreams! — Beth, Larsen and their team do ultimately catch the predators. Well, two of them, anyway. Although Beth tries to intimidate Eric’s stalker with violence, it seems he isn’t scared off that easy, as evidenced by the field trip he takes to Beth’s house later that evening.

But it’s not just because these detectives are good at their jobs that they’re able to solve the case so quickly. On the contrary, Beth and Larsen both have experience with stalking: Beth was a victim once upon a time, and it seems Larsen is a stalker himself. Throughout the hour, he stays in creepy-close proximity to his young son and the boy’s mother Amanda, who apparently relocated to Los Angeles after Larsen destroyed their family (likely by sleeping with his former boss’s wife. That’ll do it!). Even though Larsen insists he wants to change, Amanda still warns him to stay away from her and the boy — but based on the photos he’s secretly taken of both of them, Larsen doesn’t plan to heed her advice.

Throughout the series’ premiere hour, Maggie Q and McDermott have a particular chemistry in front of the camera, which lends itself well to the show’s fast pace. (Also: I can’t be the only one racing to download Michelle Branch’s episode-closing cover of “Creep,” right?) All of that said, though, Stalker‘s debut episode doesn’t offer its viewers any silver linings. In fact, it’s frightening in a way that many other procedurals aren’t. Taking into account the show’s right-before-bed time slot, Stalker‘s fear factor could ultimately be its downfall.

But what did you think? Are you hooked on Stalker, based on tonight’s premiere? Grade the episode via our poll below, then hit the comments to back up your choice!