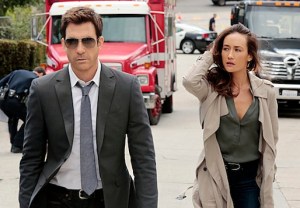 RELATED CBS’ Fall Schedule Kicks Off With Thursday Night Football; Two and a Half Men, Elementary Premiere in Late October

THE FIRST IMPRESSION | When the president of CBS Entertainment touts a show as “the scariest drama to ever air” on the network, you go in with certain expectations. And while elements of the Stalker pilot are, make no mistake, damn creepy — you will never look at your bedroom throw rug the same way again — this horror fan was a bit underwhelmed. (Was I disappointed that a Big Twist I predicted never came to fruition? Or maybe my sensibilities are too twisted? Discuss.) It very well could be that exec producer Kevin Williamson (The Following, Scream) didn’t want to go “all out” just yet with the pilot and risk giving CBS brass any heebie-jeebies as they made their fall TV picks, since I’m hearing that he’s got frightfully edgy plans for this latest endeavor.

Of the cast, it’s great to see Maggie Q again leading a show (if you’re hoping to see her kick a little ass, you’ll get that, though Beth may be even more dead-serious than Nikita!), while McDermott’s interloper is, by design, met with an uncomfortably chilly reception. Sure ’nuff, Beth and Jack each have “issues” in their past that would seem to service a serialized element to the series as it tackles Cases of the Week. Lastly, being a Williamson joint, Stalker has some terrific musical cues, including a haunting Michelle Branch cover of “Creep.”

THE TVLINE BOTTOM LINE | Stalker is, among other things, a perfect companion piece to lead-in Criminal Minds, so CBS shouldn’t miss a step when it comes to “flow” for the night, as CSI gets shuttled to Sundays. Subsequent episodes, though, would be wise to amp up the “OMGWTF!” factor, if only to generate buzz.

Watch a video preview for Stalker, then vote in our poll below.