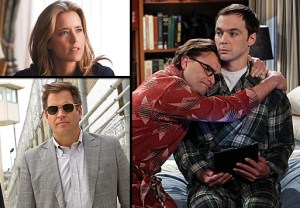 CBS is second out of the gate this year in detailing its premiere plan for the 2014-15 TV season. It kicks off (appropriately enough) with its brand-new Thursday Night Football offering, starting Sept. 11.

The Eye’s non-sports fare starts unspooling on Sunday, Sept. 21 — with the debut of Tea Leoni’s Madam Secretary followed by The Good Wife. Then, as previously and well-reported, The Big Bang Theory will open Season 8 in a new time slot (Mondays at 8/7c, stating Sept. 22). But by Oct. 30, it’s business as usual for America’s most watched network, as TBBT, The Millers, Two and a Half Men (entering its final season) and Elementary all reclaim their Thursday home.

On tap for midseason: The Mentalist, Mike & Molly, Undercover Boss as well as new series Battle Creek, CSI: Cyber and The Odd Couple (the latter of which is being retooled).

RELATED Fall TV Poll: Tuesday — NCIS Vs. The Flash and Other DVR Dilemmas

NOT RETURNING NEXT SEASON: Bad Teacher, The Crazy Ones, Friends With Better Lives, Hostages, Intelligence and We Are Men