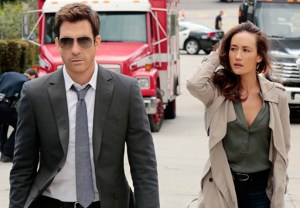 Kevin Williamson wants you to know his new crime drama Stalker (premiering Oct. 1) is not The Following.

While the Kevin Bacon-starrer “was meant to be a popcorn thriller,” the upcoming CBS series, like much of the network’s lineup, “is a crime drama,” Williamson said Thursday at the Television Critics Association summer press tour in Beverly Hills. “This is a procedural. It’s a totally different show. It’s eerie. It’s creepy. It’s suspenseful.”

Despite Williamson’s past work, which also includes the Scream horror flicks, and Stalker‘s flashy violent opening act – intended in part to help the pilot get picked up, he admitted – the auteur rejected the idea that he’s known for stylized violence.

Instead, he said, he seeks out emotional beats.

“I’m looking for my Dawson’s Creek montage at the end of every episode,” he said. (Hence a Michelle Branch cover of “Creep” over Stalker‘s final scene.) “I’m writing for the moment after the scary…  I’m trying to be different, and I’m trying to express myself in a different way.”

As such, Williamson said his CBS drama will not be as bloody as The Following – and the hard-to-watch acts in it won’t just target females.

“I don’t want it to become a show that’s just violence against women,” Williamson claimed, adding that the series that starts with a female potential victim will become “more balanced” as it progresses.

Williamson said he also aims to accomplish some good by exploring the traumatic subject matter. “We’re doing an entertaining show,” he continued, “but at the same time, I’m hoping to raise a little bit of awareness of this crime.”